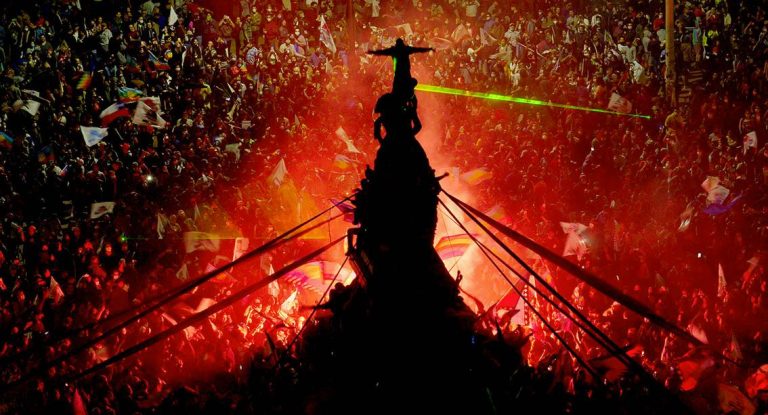 My Imaginary Country, which premiered to standing ovations at Cannes this year, is perhaps the documentary Chilean filmmaker Patricio Guzmán has always wanted to make.

In 2019 Guzmán told me, ‘I express a longing for Chile to improve throughout my films – a hope that Chile will return to democracy, recuperate its maturity.’

Neither of us were prepared to hear one week later that young students in Santiago were jumping the metro turnstiles in outrage at the fare hike, igniting nationwide protests that would continue for two years, call a million and a half people to the streets of Santiago and achieve concrete, communal change under the slogan ‘it’s not about 30 pesos, it’s about 30 years’.

‘In my day, political parties led the revolution, today Chileans distrust all parties and institutions,’ Guzmán explains with reverence for the young people at the forefront of the movement. The political amnesia Guzmán revealed in his films after returning to Chile in the ‘90s has finally diffused and ‘There are now three generations without fear.’

As demonstrators told their government and the rest of the world in October 2019, ‘Chile despertó’ (Chile woke up).

My Imaginary Country is stylistically close to Guzmán’s 1975 three-part real-time documentary about Allende’s (fall from) government, La Batalla de Chile in its function as a vivid document of events, brightened by personal interviews. It strays from the poetic style of his recent trilogy, which investigates Chilean identity using the country’s geographical characteristics as a metaphor and an opening.

Guzmán investigated and framed the Pacific Ocean and Chile’s south coast in Botón de nácar (The Pearl Button), the Atacama’s sands and astronomers in Nostalgia de la luz (Nostalgia for the Light), and the vast Sierra that protects Santiago in Cordillera de los sueños (Cordillera of Dreams). Here, the protagonist is the estallido itself.

Women’s voices make up an important majority of the interviews, reflecting the centrality of their demands within the uprising and their key roles within the (gender equal) constituent assembly, who have been elected to rewrite the country’s dictatorship-era Constitution. Almost all of the interviewees promise ‘There’s no going back.’

Highlights include a moment with Elisa Loncón, the Mapuche president of the constituent assembly, who explains the Mapuzungun expression ‘¡Marichiweu!’ (¡Diez y mil veces venceremos!) – another slogan of the protests; and an allegorical conversation with a young chess player elucidating the importance of pawns, the most important pieces on the board when all eight work together.‘ Make war on the chess board, not on the streets’ proclaimed Caissa, goddess of chess, as on the chess board there is conflict, there is battle, but rather than violence, there is dialogue.

These interviews with writers, filmmakers, photographers, community leaders, psychologists and politicians are threaded together by shots of the characteristic cacerolazo. Close-ups of demonstrators emotionally and contemplatively banging the walls with pots, pans, cups, stones, and fists feature repeatedly.

To film a fire you have to be at the site of the first flames,’ Guzman’s characteristic deep-toned narration introduces. In some ways, Guzman helped light the first fires of change in Chile almost 50 years ago, as documented in La Batalla de Chile. He then burned in those flames as a political prisoner held beneath the national stadium and as a forced exile. Yet, in My Imaginary Country, there is a tangible distance between Guzmán and the fiery protesters he eulogises. He isn’t precisely involved in this recent uprising and it is unclear how much of the footage – particularly, shocking scenes of extreme violence in the streets – is filmed by Guzmán.

It feels as if, now at 80 years old, Guzmán makes sense of the events of the past few years in Chile by –slightly distantly– watching history come full circle. ‘The effects of the revolt that altered the soul of Chile can still be felt today’, he narrates, with a hint of pride. But Guzmán feels this is a new era for Chile.

By holding his own experiences of 1973 in one hand while telling the story of Chile’s recent uprising in the other, Guzmán commends the Movement’s ability to redefine Chilean identity in the memory of its difficult past. Indeed, as he narrates, and proves through his work, our greatest weapon is memory.

Although Guzmán told me back in 2019 that no one in Chile watches his films, I can’t help feeling they have contributed towards this constructive uprising – and feeling Guzmán’s sense of calm satisfaction on witnessing it. Significantly, on 16th August, his 81st birthday, Guzmán received a Lifetime Achievement Award at the Santiago International Film Festival in his country, Chile.

A nation is what its citizens make of it: how it is imagined and reimagined, conceived into being and upheld with faith and imagination. What better title for this culminating film but ‘My Imaginary Country’.

My Imaginary Country‘s theatrical release is closely tied to two important political dates: on September 4, 2022, the Chilean people voted on adopting a new constitution to replace the one imposed on the country by the Pinochet dictatorship. Although overwhelmingly rejected it has paved the way for further discussions to take place. September 11, 2022 also marks the 49th anniversary of the military coup on September 11, 1973, which brought Pinochet to power and which Guzmán documented in The Battle of Chile.

My Imaginary Country will be released into US cinemas on Friday 23rd September and can also be seen at the upcoming BFI London Film Festival running 5-16 October 2022. Tickets to the Festival will go on sale on 13th September.