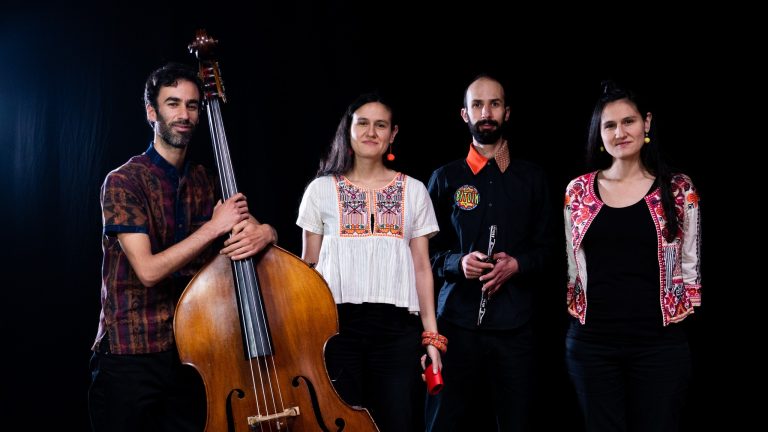 Bituin are Building Their Identity Through Colombian Jazz

The 10 tracks were recorded during a live Tiny Desk-style ¡Opa! session on just one microphone, in the presence of a live audience. This served as a taster of Bituin’s late-November live show, Señora Colombia, at Bogotá’s historic Teatro Colón, where they performed a roster of songs from ¡Sesiones Opa! and tracks from their 2021 record Divina Cosecha.

Bituin’s careful arrangements showcase the band’s vanguard sound and artistry and are a beautiful tribute to their musical contemporaries, many of whom they’ve collaborated with, like Kike Mendoza, Edson Velandia and Lucas Hill.

Valentina explains, “the lovely thing about singing these songs is that the composers are alive, they are our friends and our contemporaries, people we’ve shared and experienced with in different contexts, whose songs we treasure.”

Santiago adds that “it’s quite an organic process and gives birth to really distinctive music with a lot of identity – perhaps more than what can be achieved playing songs by composers from other eras or from more distant regions, with whom there has been no direct interaction.”

Their rendition of Abelardo Carbonó’s early champeta track “Palenque” keeps a sense of the self-taught guitarist and roots-lover’s trailblazing experimentation, in a slicker, jazzier interpretation.

The upbeat, joyful vallenato “Orgullo Nacional” written by Juanita Áñez is dedicated to Bituin’s intrepid listeners who have held their ears and hearts open throughout the band’s 11 years playing together. You can hear smiles shaping the vocals in the live session recording. As the band performed this new, rhythmically irregular composition in Teatro Colón, listeners clapped along with the hand percussion, cowbell and güiro that guided the melodica and voices.

“Desentierro”, on the other hand, composed by Kike Mendoza (a long-time collaborator of Bituin) and with lyrics by Valentina Áñez, is a more sombre, emotional, spiritual song written about the ritual exhumation of mass graves from Colombia’s 52-year war. It sings of the dignity in being able to say goodbye to your loved ones. The song was performed in Bogotá with respect and a strong sense of the ceremonial, with Juanita and Valentina slowly crossing the stage as they sang, each holding a lit candle.

Santiago explains: “Rather than a tribute to these composers, what’s led us to reinterpret these songs is a sense of building an identity, one that is increasingly our own; Colombian; from our own perspective and experience.” Through the ¡Sesiones Opa! album and video, and Señora Colombia live show, Bituin beautifully celebrates national creativity and musicianship.

Listen to the album on Spotify and other platforms, or watch the live session below: