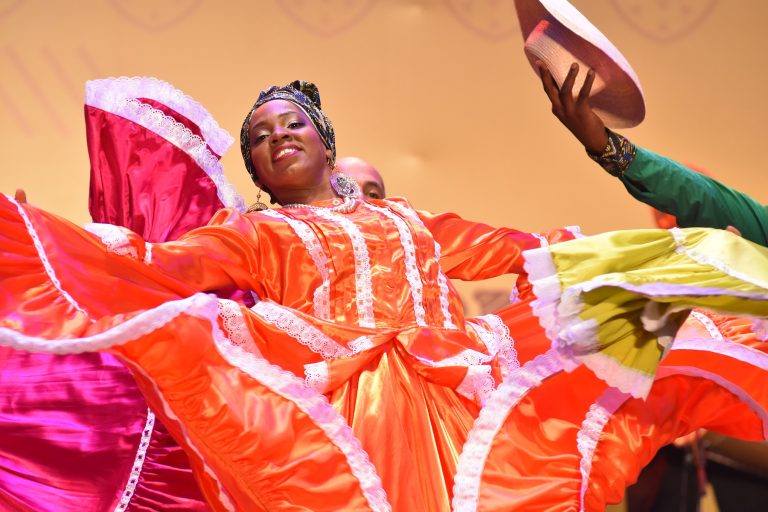 Within the hot and humid Santiago de Cali night, the streets surrounding Petronio Álvarez festival ring out with the sound of people selling traditional aphrodisiac liquors viche, tomaseca and arrechón (translating roughly as ‘horny’), homemade and bottled to be sold on the street. In some ways these local drinks represent something of the festival’s spirit, traditional recipes that have been passed down for generations within the Afro-Pacific communities of Colombia. Despite the festival’s growing size and international popularity, the winding street market surrounding it still has a free-for-all vibe similar to the likes of Notting Hill or St. Pauls Carnival in the UK, or a Second Line parade in New Orleans. 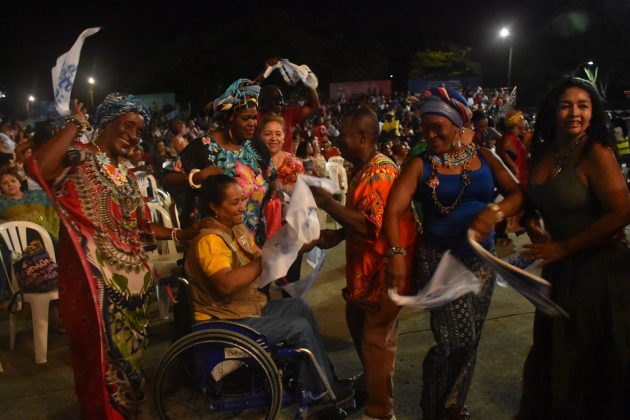 That’s not to say the festival isn’t a huge and well organised production, with around 50,000 attending the festival’s twenty-second year. It can boast various spaces and stages, including an extensive Pacific food hall, dance competitions, academic workshops and a family friendly zone, making it all the more impressive that the festival is totally free to attend.

Within the expansive main arena there’s little of the chaotic drunken air common to many events of this size. Between the local community and visiting tourists attending, there’s a vibrant positive energy and family friendly atmosphere where everyone is chatting, sharing drinks and dancing in flowing currents of bouncing bodies. Although Cali is one of the major cities of Colombia, it has something of a ‘one big village’ atmosphere, a sense of community connection and respect.
As the night winds on and energy levels ramp up, there are pulsing, spontaneous mosh pits around the arena, waves of people flowing hypnotically from side to side as the crowd throw up their white bandanas to form a waving, fluttering sea of arms. The colours on display are impressive, everyone dressed in their Sunday finest for the festival. 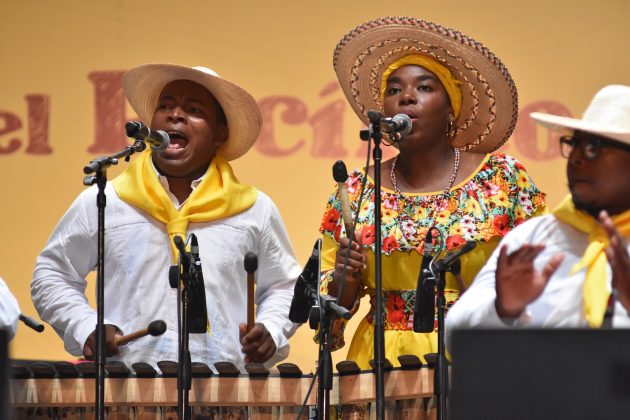 The festival is in essence a competition between bands, with winners being chosen for each of the four categories of Pacific styles on display; the traditional marimba orchestras, the chirimía category (flute or clarinet bands, mostly interpreting the music of Chocó), violin string bands of Cauca and free-form bands including full drums and guitars (previously hosting now famous bands such as ChocQuibTown and Herencia de Timbiqui). In keeping with the family atmosphere there’s also a young person’s Petronio competition too. There’s an eclectic danceability to the modern crossover bands performing later in the competition, although the traditional groups have something of an intrigue and suggestion within the winding rhythms; a soothing flow that carries you along in the mystery of the sparse marimba melodies.

Both musically speaking, and in terms of the culture it represents, there is a strong connection to Africa, in which diasporic communities in the region have developed a rich and unique variety of musical styles. Musician, anthropologist and co-ordinator of the festival’s academic workshops Manuel Sevilla recounts “a lot of the music here comes from the history, enslaved communities taken from Africa and bought here to the Americas, yet people in this generation are not their ancestors. Another way to see it [is] that the Pacific is an excellent example of cultural creation, enslaved communities created all this new culture with almost nothing, mixing traditions they had from Africa, with what was already here. Places such as the Colombian Caribbean are also great examples of cultural creation [with styles such as champeta, and the drumming of San Basilio de Palenque]”.

Music of the Colombian Pacific has gained somewhat more attention recently, with Pacific folk singer Nidia Góngora performing to growing audiences in Europe and beyond, her fantastic 2017 collaboration Curao with British producer Quantic not doing anything to harm her reputation. It’s a homage to the festival’s spirit of humility and community then, to see her performing during the festival as a backing singer for one of the groups in the competition.

For the last five years in a neighbourhood far on the outskirts of Cali, Nidia Góngora has hosted a big communal street party, sharing folk songs and stripped back marimba arrangements echoing the beautifully sparse roots of Colombian Pacific music. A traditional street folk session stretching into the early hours amidst the dense Cali air out on the edge of town.

The majority of those performing at the festival are not working as ‘professional musicians’, playing this music in communities alongside normal working life. Often the music is intrinsically connected to ritual events such as religious festivals and funerals, where such bands regularly perform. Yet the festival offers a very grand stage for these musicians, performing to up to 50,000 people in an arena the scale of any other international festival. Manuel Sevilla believes “the likes of Nidia and Herencia de Timbiqui have shown that this music can be very visible outside Colombia. I believe this holds a mirror up to young people in the communities here that these traditions are valued internationally, that they could really become professional musicians. Obviously people have to survive and work jobs like fishing, but I think big events like Petronio inspire a certain belief”. 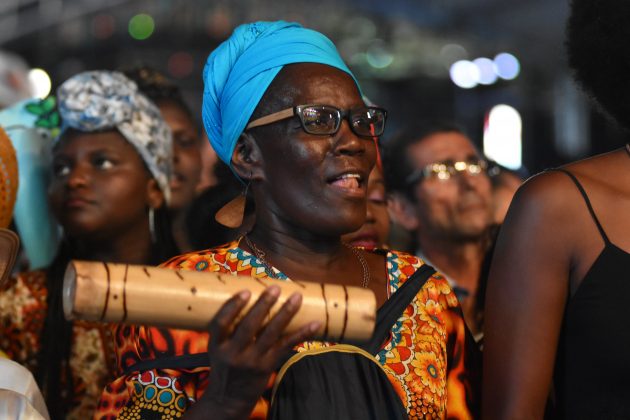 Lyrical messages from the bands performing at Petronio inherently seek to represent the daily realities of life in the community, yet the Colombian Pacific coast is a huge stretch of land that contains within it countless different cultures, heritage and experiences. Bands from certain areas are more openly ‘political’ in their lyrical critiques addressing the problems of the region, such as in the Chocó area, a known hotspot within a country that since the official 2016 peace accords, “311 activists, community leaders, and human rights defenders have been murdered.” Despite daily threats for some rural and indigenous communities (such as the Nasa people in the surrounding valley of Cauca), the festival is undoubtedly a celebration of a rich and thriving culture that has continued throughout years of difficulty, acknowledging this history in a spirit of affirmation and joy.

Colombian salsa star Yuri Buenaventura projects a strong message of history and struggle, projecting images of deposed African leader Patrice Lumumba during his opening song. The images bring into focus the heritage of Africa in his homage to the roots of Pacific coast music. Yuri plays popular salsa tunes with his brass band, yet incorporates all of the influences of marimba and Pacific percussion. It’s an impressive mixing of tastefully chosen folklore and popular salsa that knows how to please a crowd, by an artist perhaps more well known in Europe than in his native Valle de Cauca region of Colombia, releasing collaborations with the likes of Mano Negra and Elton John. During one of the academic workshops taking place during the festival, Yuri states “I can’t claim to represent life for the average black man and woman of the pacific coast, this is music sung in cafes and bars, around the house, between mothers and children, singing about the everyday events in the community,”.

Although the festival is undoubtedly an impressive spectacle, something to dance, drink and celebrate in vibrant Technicolor, the deeper implication always on display is the valuing of a culture and appreciation of a long and complex heritage. Manuel Sevilla summarizes; “people come from all over the world to dance to the music, to enjoy an amazing party, but for me there’s a bigger message here that is important to Colombia. This is music that comes out of the community process and traditional ritual events, the message I’d like people to take from Petronio is people are working together in their communities and valuing this process with a respect for the traditions.”