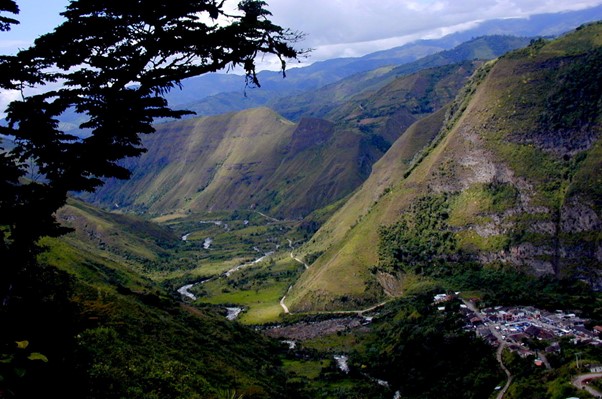 Ecuador: Intag Stands Up To Mining

This article is republished courtesy of Latin American Bureau, the original article can be found here. It is the latest post in LAB’s London Mining Network blog, a partnership initiative between LAB and LMN. It contains a roundup of Latin America-related content from London Mining Network’s February 2022 newsletter, with additional material supplied by LAB, researched and written by Kinga Harasim.

In Ecuador, residents of Intag have renewed their historical struggle against mining. Affected communities, along with the Alliance of Organizations for Human Rights, the Amazon Frontlines and the Intag Sanctuary of Life, filed a Protection Action demand at the end of November last year, which was dismissed on 31 January by a Cotacachi judicial official, Oscar Coba Vayas.

Llurimagua is a copper exploration project developed by The National Mining Company of Ecuador (Enami EP), through a strategic alliance with the Chilean company Corporación Nacional del Cobre (CODELCO). The project would begin operations in 2024, with a capacity of 210,000 tonnes of copper per year and a useful life of 27 years.

The Action was directed against the Ministries of Environment, Water, and Ecological Transition, as well as Energy and Renewable Resources, due to the large number of constitutional rights violations committed by the mining initiative. In 2008, Ecuador became the world’s first country to recognize and enshrine nature’s rights in its Constitution. As a result, the Action seeks a declaration of violation of nature’s rights as well as the lack of social licence for operation.

Nonetheless, the judge failed to acknowledge the lack of the consultation in the delivery of the mining concession. According to the document, consultation took place during the socialization process in 2014. However, communities claim it was a merely formal process of information and not a genuine process of consultation and they intend to file a complaint with the provincial government.

Our wealth is not copper

Intag is located in the western foothills of the Ecuadorian Andes, Cordillera del Toisán, and is part of the buffer zone for the Cotacachi – Cayapas Ecological Reserve. The Tropical Andes are one of the 36 worlds ‘biodiversity hotspots’ – which means they are a region of exceptional endemic biodiversity that has lost at least 70% of its original habitat.

‘Intag’s wealth is not copper. The true wealth is in its people, its communities and its enviable biodiversity’ – says Íntag Santuario de Vida.

Thousands of species have been identified within the mining concession, many of which are threatened with extinction, such as the brown-headed spider monkey and the Harlequin-snouted frog, which was thought to be extinct until rediscovered in 2016.

However, Andrea Terán, a biologist, believes that the frog was never extinct, and claims that – ‘If it wasn’t found before, it’s because the study wasn’t done properly; it’s an intentional omission, and they don’t report it because it causes them problems.’

The Llurimagua project provided an Environmental Impact Study in 2019, but it does not include all of the species in danger of extinction in the mining area, nor does it include accurate climate or groundwater data. The Toisan Range, where the copper deposit is located, is topographically very rugged and contains numerous geological faults, posing significant earthquake risks and increasing the likelihood of landslides and tailings pond collapse.

Activist Carlos Zorilla claims that Intag’s struggle is not only about the frogs, but about ‘the right to wellbeing, … maintaining balance and social harmony to ensure that human, collective and nature rights are respected over corporate rights. Today we see shamefully, again, how the state in our Protection Action is aggressively favouring the rights of a transnational.’

He also claims that Codelco’s request for a second international arbitration process with Ecuador and Enami was a ‘form of blackmail’ in order to secure the investment. The International Center for the Settlement of Investment Disputes (ICSID) received the request at the end of last year.

Codelco had previously requested arbitration with the International Chamber of Commerce in April last year, as Enami had not followed through on a 2019 agreement to jointly develop Llurimagua, which was at an advanced exploration stage. A period of negotiations was established, which expired last May with no further resolution.

As a result, on 24 December 2021, CODELCO filed for an international arbitration process for the violation of the Reciprocal Promotion and Protection of Investments. However, the company hopes it will lead to agreement with Ecuador and accelerate development of the project.

In late October 2021, residents of Aquia, Áncash, organized an indefinite strike and blocked access to the operations centre of Antamina Mining. This action was the result of the mining company’s failure to respond to the community when it insisted that they had the right to grant or withhold permission to use their land for purposes such as the installation of a mineral pipeline and the potential environmental impacts on the community.

The people of Aquia have never donated anything

‘We, the peasant representatives of the community of Aquia, intend to file a complaint against the state for failing to serve us. Antamina has been usurping our land for over 20 years… claiming that it was donated. The people of Aquia have never donated anything. We sent the documents this year  … with pending demands dating back 20 years.’- said Adan Damián Gamarra, the president of Aquia community. ‘If Antamina does not leave peacefully, we will take eviction action. We will not be the first community to die defending their lands. The State and Gobitz will bear responsibility for any deaths. Not us.’

‘It’s not just about the road!’

Antamina is the largest producer of copper and zinc in Peru and is controlled by BHP and Glencore with smaller interests held by Teck and Mitshubishi. The deposit is located in the San Marcos district, Huari province, and the minerals are transported through a pipeline to the port in Punta Lobitos, Huarmey.

The company stated in a memo that ‘it is false to speak of land usurpation’, because the road leading to the mine is public; they built it more than 20 years ago and handed it over to the Ministry of Transport and Communication. ‘The pipeline is underground, and in the case of the section that crosses the community of Aquia, it follows the route of the highway that was built by Antamina’. ‘The pipeline passes through properties that have the permits and documentation required by law and the Peruvian State’.

Nevertheless, Adan Damian points out that the pipeline area is not the only space the company occupies: ‘It’s not just about the road; Antamina must stop lying. There are drainage lines, topographic and geotechnical monitoring points, mineral pipeline monitoring points, a mineral pipeline crossing through the middle of town, transects off the highway that Antamina has not disclosed in the documentation, and communication stations within my community. We’ve always asked Antamina to send us the documents, and we’ll give them seats in the assemblies.’

The protests extended to Punta Lobitos port, on 29 October protesters entered mining facilities, where they were confronted by police. This has caused escalation of the conflict and protesters responded by attacking offices with stones and wooden sticks. Next day a group of protesters set fire to a water tanker truck on the access road to the mine, and the driver was injured.

A week after the strike begun, a government delegation travelled to Aquia to set up the Forum for Dialogue to mitigate the conflict which had led to protests and forced the company to suspend operations on 31 October. The parties were able to reach an initial agreement and the community agreed to lift the blockades and halt the strike.

Negotiations, chaired by the Presidency of the Council of Ministers (PCM), were to last for 90 calendar days, however, the Secretariat for Social Management and Dialogue has extended this period to 120 calendar days, until 29 June. The objective is to set up a plan for compliance with the agreements reached so far which are focused on economic, social and environmental development of the district.

Moreover, the president of the community of Aquia made a series of detailed requests: ‘that the road drains be redirected because they affect their grasslands; the socialization of geological surveys and a diagnosis that allows identifying the monitoring of the geological fault; the environmental closure of quarries and dumps; the assessment of fragile systems and the impact on ancestral fences and boundaries; the prevention of solid waste; the disclosure of the truth about land documents transferred by the community; and documentation for the use of communal lands for the placement of geotechnical and topographical points; and compensation for land that was used for dumps.’

The meeting concluded with the participants signing an agreement in which Antamina commits to retract complaints against the leaders of Aquia and Puerto de Huarmey – ‘That’s something we’re leaving behind’, said Víctor Gobitz, the president of the Antamina. They also agreed to set up a liaison office and improve Internet services in the area for the benefit of children and youth.

Chile: Albemarle Mining faces fines of up to 4 billion pesos for overexploiting brine in the Salar de Atacama region of Antofagasta. The Superintendency of the Environment (SMA) implemented a sanctioning procedure that included two charges: exceeding the annual extraction limit (452 liters/second was extracted between October and September 2019 when the annual limit is 442 liters/second) and failing to comply with all of the measures committed to in the Aquifer Alert Sector’s Early Warning Plan (PAT). ‘In addition to Albemarle, three other mining companies operate in this area: Zaldvar (CMZ), Escondida (MEL), and Soquimich (SQM), whose activities may have a direct impact on ecosystems and communities. To date, charges have been filed against all of them for various environmental violations,’ said Cristóbal De La Maza, Superintendent of the Environment.

Guatemala: An investigation by 20 international media reporters revealed that a Swiss-Russian mining company from the Solway Investment Group hid reports of contamination in an indigenous area El Estor, in north-eastern Guatemala, as well as buying favours and using intimidation, accusations that the company rejected. According to the ‘Mining Secrets’ investigation, in which 65 journalists from 15 countries took part, this company and the Guatemalan government lied in 2017 when they claimed that a strange red spot which appeared in Lake Izabal, adjacent to one of the mine’s ponds, was caused by the reproduction of algae.

Honduras: As part of President Xiomara Castro’s 2022-2026 Government Program, the Ministry of Energy, Natural Resources, Environment, and Mines declared Honduras a country free of open cast mining on 28 February. According to the agency, ‘the approval of extraction permits is revoked, as they are harmful to the State of Honduras, threatening natural resources, public health, and limiting access to water as a human right.’ Furthermore, areas of ‘high ecological value’ will be immediately intervened to ensure ‘their conservation and the common good of the people.’

This is the latest post in LAB’s London Mining Network blog, a partnership initiative between LAB and LMN. It contains a roundup of Latin America-related content from London Mining Network’s February 2022 newsletter, with additional material supplied by LAB, researched and written by Kinga Harasim.