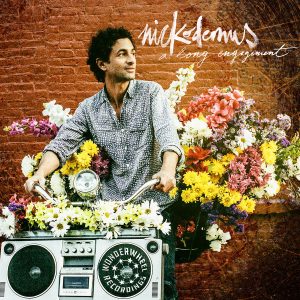 A Long Engagement is not just an album name. Nickodemus has been a long time defender and evangelizer of world music. Putting ethnicities to one side, he is always blending Afro-Latin heritage with diasporic flavours from every corner. It’s a very New York kind of love affair.

His engagement, a 25 year relationship with the dance floor, has delivered original tracks and remixes for the likes of Bob Marley, Nina Simone and Thievery Corporation. He is also behind the Wonderwheel Recordings label, who are consistently putting out fresh albums, and resident DJ for the famous Turntables On The Hudson parties.

Based in the Bronx, his connection with migrant culture is natural, something you can clearly see in his previous list of collaborators, counting Quantic, Apani B and Simbad. For his latest album, he is not short on this list also, working with the Sudanese singer Alsarah, Major Lazer collaborator Jahdan Blakkamoore from Guyana and Argentinean label ZZK Records’ first lady, La Yegros, among others.

The album is eclectic and danceable, as you might imagine, and it plays with genres like traditional cumbia, dub, gnawa music, afrobeat, trip-hop and house. “Inmortales (Body Move)” mixes the instrumental talent of Gitkin and Zeb (The Spy From Cairo) and the vocal versatility of Argentinean female trio Fémina, rapping on a Turkish-inspired beat. The funk element is always present and “Will You Still Be Here?” is the joint, with fellow soul mates The Real Live Show & Pimps of Joytime involved. Long time collaborator Carol C also gets into the party on “Do You Do You?”, where Zeb helps with the music a second time around.

As you can see, it’s all in the family, a global community making music, in one of the most cosmopolitan cities of the world. A musical tribute to worldwide gypsies, hopefully breaking all the walls that some mad men are trying to put up to divide us.

A Long Engagement is available now on Bandcamp