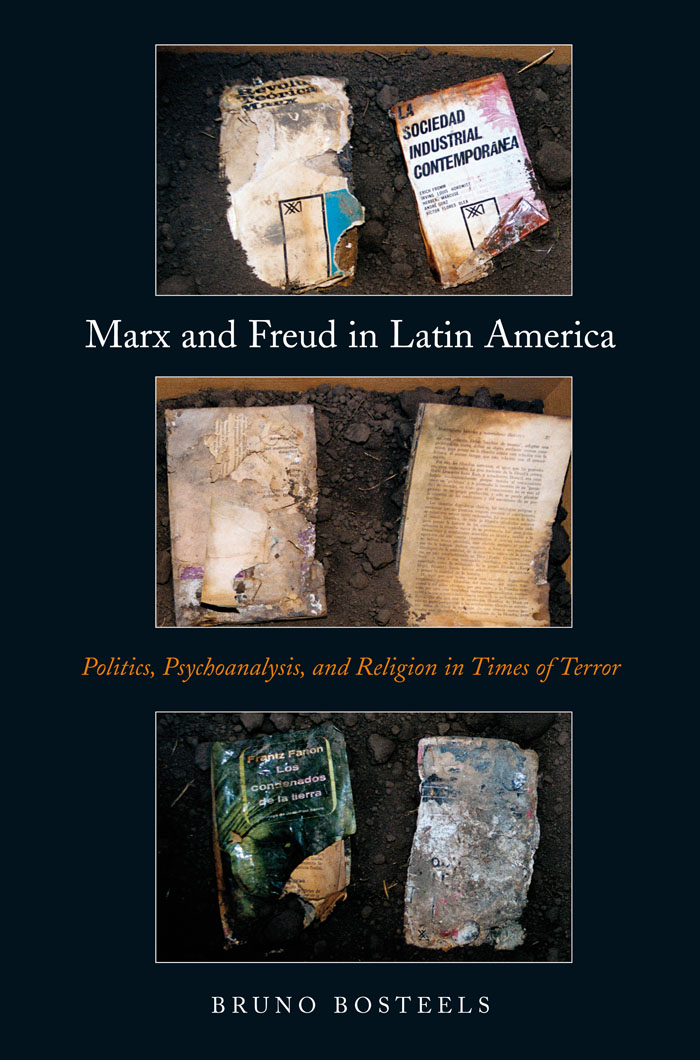 Marx and Freud in Latin America

Marx and Freud in Latin America, subtitled Politics, Psychoanalysis and Religion in Times of Terror, written by Bruno Bosteels and published by Verso, is a collection of ten essays which explore the enduring influence of the two on the philosophy, art and culture of the region.

Asleep on the mode of production

In the West the political Left is washed up, running with the hounds, doing role play or in the middle of a sleep of Rip Van Winkle proportions. Bosteels, though, keeps the faith. Is it the end of history? In Latin America at least, with 11 left-of-centre democratically elected governments and a few circus acts, maybe it is the start of something a bit more exciting.

“Two centuries after the wars of independence, one century after the Mexican Revolution, half a century after the Cuban Revolution, the new mole [a reference to Hegel] has re-emerged spectacularly in the continent of José Martí, Bolívar, Sandino, Farabundo Martí, Mariátegui, Fidel, Che and Allende,” says Emir Sader. “It has taken on new forms in order to continue the centuries-old struggle for the emancipation of the peoples of Latin America and the Caribbean.”

Maybe it’s a dialectic. It could be worse. What could be more unimpressive to the prospects of humanity than believing that market capitalism is as good as it gets? Bosteels is anxious to debunk this but in the shape of Antonio Negri and Michael Hardt’s Empire, he finds that the prognosis of an appeal to ethics is redundant in the face of the empire (global capitalism) and it can only be undone by a shadowing of its functions from within. Don’t be surprised if you come across an anarchist “listening bank” being robbed by plutocrats.

In the Latin American example, at least, they’ve experienced neo-liberalism and found that not only did it not fit, it worked about as well as a chocolate parasol. Bolivia and Argentina being a cases in point. Even the chief pasajero, Chile is having a re-think.

Of cant and Kant and Hegel’s mole

What is the value of a singular imperative which offers a dehumanised abstraction? Empires always hold the seeds of their own destruction and the seeds of this particular one are the deification of money, rolling injustice and the commodification of everything, even grannies. At the very least a dialectic needs a thesis and an antithesis. This is not to say, though, that another kind of materialism is necessarily the answer. But a choice of two is at least a choice. The trouble is that Rousseau’s “man is born free but he is everywhere in chains” is a prevailing theme whether it issues from Marx, Lenin, Mao, Castro, IBM or the Heritage Foundation. There is a synthesis, and it’s materialistic and disquietingly symmetrical. As for the chains, the argument is not so much about their existence or length, but why they exist at all.

The commonwealth of ideas

The major contribution of this book is to open up the debate, to assay the options but above all to think about something other than the accumulation of money for its own sake. Even if you doubt the thesis that it posits, it does at least have some bearing on how we establish truth and reality and, in the Freudian sense, how we own it.

Bosteels work is assidiously out to find consciousness – any consciousness, sub, semi or un. Where the hell is it? Is anybody there? What is it about humanity that it seems so loathe to subjectivise to objectivise (i.e. to get off its collective arse and create something better)? To this end he racks up an impressive list of thinkers, writers, essayists, playwrights and film-makers. The excerpts on José Martí (Lucía Jerez), Tomás Gutiérrez Alea (Memorias del Subdesarrollo/Memories of Under-Development), José Revueltas (numerous essays), Sabina Berman (Feliz Nuevo Siglo, Doktor Freud/Happy New Century, Dr Freud), Paco Ignacio Taibo II (noir detective stories featuring Héctor Balascorán Shayne et al), Ricardo Piglia (on the application of plaigarism to the novel), Alejandro González Iñárritu/Guillermo Arriaga (Amores Perros) and León Rozitchner (various) are especially interesting and supportive of the book’s thesis. For this reason alone the book is worthy of the struggle, which in parts, is something of a long march.

An act without purpose?

The Marxist reductio ad absurdum, like it capitalist counterpart, makes the universe mechanistic and transactional. Not even art escapes from a utilitarian raison d’etre. You can’t paint, write or compose out of an instrinsic desire to do so, it’s got to be sullied by a transactional metaphor which it doesn’t deserve and to which it isn’t entitled. It’s at times like this that you wonder if the artists of Lascaux or Altamira were expecting Sotheby’s, Peggy Guggenheim or a party of shuffling tourists to pop round any minute to validate them. Just as horses know how to get water and when they need a drink, people know that they can’t but create. It is natural to us as a feeling of justice/equity and a desire to get our rocks off. To construe it as some bourgeois self-indulgence enjoyed at somebody else’s expense is to entirely miss the point.

All the ingredients are there for advancing humanity into a different realm, it’s just a pity that the argument is binary: a choice between two polarities whose dogmatism has form in stifling and killing its subject, ‘us’. When Hegel wrote: “The owl of Minerva spreads its wings only with the falling of dusk”, he did so to point out that wisdom and answers come to us from extending the parameters of our search not in delimiting and setting it in concrete.

Recherche du temps perdu or this is where we came in

Jorge Luis Borges quotes from Francis Bacon’s Essays in his El Inmortal/The Immortal: “Solomon saith: There is no new thing upon the earth.” As history repeats itself you just have to stay on the bus. The same cyclical transgenerational amnesia and finitude, which retards the process of what Ernesto “Che” Guevara stated was the creation of a “new man”, always comes back round again. There are no limits on how many attempts you can get at the truth, bar death.

The past makes the future

The essential process of humanity is of a work in progress, a work which always struggles to lift itself from the bounds of its own particular position in time, space and history. The fact that it can be done at all – and we’ve got the input of 5th Century Athens, the Englightenment, Marx and Freud to prove it – tends to demonstrate the capacity to err, is um, frequent, but the capacity to transcend or mark a particular moment in time and space thereafter, comes by very rarely and usually because of an ephemeral spanner (war, revolution, pestilence, science…) has upset the seemingly eternal and immutable works.

León Rozitchner in Freud y el Problema del Poder (Freud and the Problem of Power) notes: “The commonality between Marx and Freud… lies in their willingness and ability to propose the hypothesis of universal truth of the political or desiring subject in answer to the crises of their time.

The present political discourse is as dead as a wardrobe full of fur coats. Credit to Bosteels, at least he aspires to explore beyond this camphorous hell.

As Marx said in a letter to Arnold Ruge: “The people will see that the world has long possessed the dream of a thing – and that it only needs to possess consciousness of this thing.” This is true whether you’re Marxist or not. Only an idiot views stasis as a desirable state.

Marx goes on: “…This does not mean that we shall confront the world with new doctrinaire principles and proclaim: Here is the truth, on your knees before it! It means that we shall develop for the world new principles from the existing principles of the world. We shall not say: Abandon your struggles, they are mere folly; let us provide you with true campaign-slogans. Instead, we shall simply show the world why it is struggling, and consciousness of this is a thing it must acquire whether it wishes or not.”