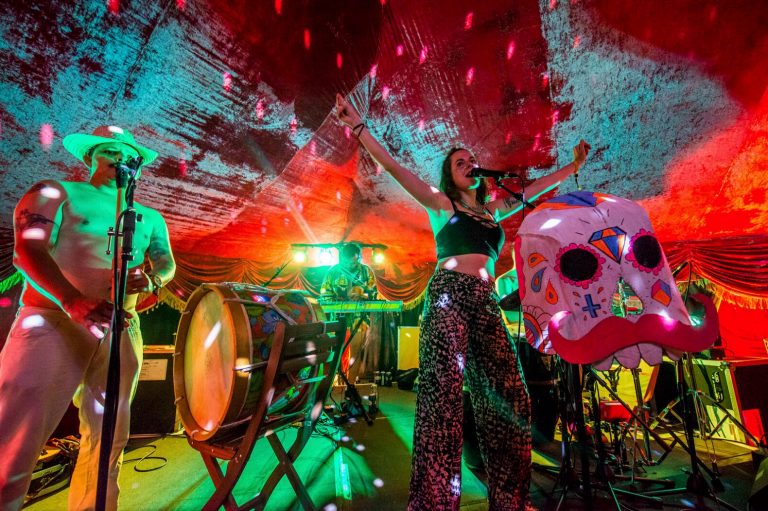 Bristol Musicians at the Forefront of UK Latinx Music Scene

A diverse Latinx music scene has been synthesising in the UK for decades, but much of its production has been centralised in the capital, where people of Latin American origin are the eighth largest ethnic group. I use the term ‘Latinx’, which although not without polemic, is increasingly used to describe Latin American or Latin American-heritage groups of mixed gender and sexuality.

In the UK as a whole, official figures estimate that there are 250,000 people of Latin American origin, but there are almost definitely more. Nonetheless it has been difficult for Latinxs to achieve visibility here. Although there are 18 ethnic groups recommended for use by the government when asking for someone’s ethnicity, Latin American is not one of them, leaving many Latin Americans feeling excluded*.

But why is this important in music? As it has for time immemorial, the arts provides an important space for communities to highlight their culture and heritage, and to explore experiences of mixed cultural identity.

JSCA, a young artist from South London, told Sophia Mena on Somos The Podcast that in order to start creating music that felt true to her, “I felt like I had to reconnect to my heritage […] Discovering my roots, discovering my heritage – that really kicked off a different type of sound”.

In 2019, Bristol’s Wardrobe Theatre hosted the multi-arts Papaya Fest, headed by Bristol-based theatre company Popelei. Acts included Andrea Spisto’s Butch Princesa, which humorously tackles questions of sexuality, identity and body image as a Latinx in the UK. The festival’s organiser, Venezuelan-British director Tamsin Hurtado-Clarke, says the festival was conceived by stuffing a traditional roast dinner into an arepa. “Clashing different cultures together can be really exciting and unlock lots of creative energy” she told Bristol 24/7.

It’s no secret that music-lovers are magnetised to Bristol, and that the city has welcomed some incredible Latin American musicians over the years. Long-time residents at Plantation (now Turtle Bay), Aji Pa’ti are this year celebrating a decade of performing together, and Cuban DJ Pilo has revolutionised Bristol’s fitness scene with PILOXERCISE®, a fitness company drawing on Afro-Latin dance and music styles. Bristol and Latin America’s unique cultural fusion (or Bristolatinidad) is also thriving in the alternative scene: Colombian Han Luis Cera is one third of synth-rock band Mutant Thoughts, who are residents at cherished live music venue The Louisiana. (Cera also runs Bristolombianos, a Facebook community group of 850+ Bristol-Latinx and curious Bristolians).

To document and celebrate the nationwide Latinx music scene of today and raise money for the community during the pandemic, [one of] Britain’s biggest Latin music promoters, Movimientos, have released a special 19-track compilation album, titled Santuario/Sanctuary – which both by its name and its ethos promotes Britain as a safe and creative home for migrants, and second and third-generation Latinxs.

Movimientos co-founder Cal Jader spoke to DJ Papaoul on his Fifth Sun radio show, which explores new electronic sounds from and inspired by Latin America. He says of the compilation: “What we’re trying to highlight is the scene in the UK and the diversity of music that’s happening here, and mostly to not show music that is a direct replica of something that’s happening in Latin America.” The UK Latinx scene is unique to any other.

“For me that’s what really interests me, that intersection of musicians connecting with UK culture, whether they be second or third-generation Latin Americans, or Brits interacting with Latin American musicians here. What you’re seeing now is second and third-generation artists who are embracing their identity […] they’re tapping into their roots but they’ve got a kind of distinct UK identity and I think that’s really fresh, really exciting.”

Bristolian musician Pablo Villierezz, who features on the album, says, “In my music I try to incorporate the Bristol vibe with childhood memories of Mexico, where I was born, and I feel very touched that audiences in the UK have been open to that, even if it is somewhat unfamiliar.”

Villierezz says: “For me this project brings together many disparate aspects although primarily it is about Latin immigrant culture in the UK and the different fusions through which we express ourselves.”

Pablo’s Bristol-based solo project Panther Panther!, which explores the current wave of Latin American electronic music through DJing and vibrant live audiovisual performances, also features on the album with the cosmic cumbia track, “Cumbia Espacial”. The upbeat funk and ska band, The Fontanas, and power six-piece Wara – both of whom headlined Papaya Fest’s music stage at the Old Market Assembly – are on there too, not to mention popular artists like Malena Zavala, Luzmira Zerpa, Malphino and Imperio Bamba, and rising talents JSCA, Esteban Card, Blue Canariñho and Stephanie Santiago.

That Bristolian musicians feature on the album is no surprise. This city’s been a hot-bed for live Latin collaborations since Latinxs started moving here in larger numbers in the ‘90s and noughties – and Bristol has been dancing to Caribbean music (including Latin Caribbean) for much longer. As Pablo Villierezz says, “The collection marks an important milestone for the growing Latin scene in the UK and it feels right that Bristol is represented within.”

From their conception, Bristol’s best-known promoters of global music Worm Disco Club have been spinning a rich and diverse catalogue of Latin music. The Bristol-based boys have been visiting Brazil for over 13 years, finding the country’s finest records and delving deep into the carnival culture of Recife in Brazil’s north-east. They’ve booked iconic modern Latinx acts for their parties over the years, including Meridian Brothers (the moniker of one of Colombia’s most innovative experimental musicians), DJ Tudo (Brazilian DJ, producer and leading researcher in Brazilian musical tradition), and genre-bending São Paulo digger, DJ Tahira. Their nights, and their Glastonbury stage ‘The Wormhole’, attract a diverse crowd who often flock to dance to pure vinyl sets.

Then there is the pioneer sweaty tropical bass night in Bristol, Midnight Ritual, whose bright aesthetic and purposeful focus on connection without borders is epitomised in the parties that have helped place Bristol within the map for Latin electronic music artists touring the UK. The night has been running since 2017 at the Stag & Hounds, Old Market Assembly and now – in lockdown – online, with ravers tuning in to the Zoom parties from all over the UK, Mexico, Peru, Argentina, Spain, New York, India and Australia.

But it’s not all song and dance. The UK’s Latin American population has been hard-hit by the pandemic, generally due to a lack of access to welfare support, services and social housing. Latinxs in London (there simply isn’t enough research on Bristol’s Latin Americans) are often overrepresented in unregulated sectors of employment. This has meant that during the pandemic, workers have been experiencing exploitation and have been forced to work – often without PPE and, at times, in spite of their need to self-isolate – or have been dismissed by their employers.

In response to the pandemic, Movimientos are directing 100% of profits from Santuario’s sales back into the community, through three organisations supporting Latin American migrants in the UK during the pandemic: LAWA (Latin American Women’s Aid); LAWRS (Latin American Women’s Rights Service) and Apoyo Communitario Sur de Londres COVID-19 (a community COVID-19 support fund). The money will primarily be used to support workers in precarious situations and vulnerable women affected by the rise in domestic violence.

Movimientos say: “With much of the Latin American community here in the UK already in insecure situations, and with the loss of culturally important spaces like Elephant & Castle Shopping Centre, and with the Seven Sisters Latin Village under threat, it’s more important than ever to use the power of music and art to fight against injustice and inequality and to help raise up voices of the underrepresented.”

Pablo Villierezz adds, “Latin American culture has always found a voice through adversity and I feel this compilation is a strong offering in the same vein of resistance. These times will pass.”

You can purchase the Santuario/Sanctuary album here, currently available exclusively on Bandcamp. It will be available on main streaming platforms from March 5, 2021.

*Groups like CLAUK and LatinXcluded work to achieve representation and have secured inclusion on forms from Arts Council England, London’s Lambeth Council, and King’s College London. There is now a parliament petition to include Latinx/Hispanic as an ethnic group in the 2021 census – although some are unsure of the term ‘Latinx’ and some would prefer to do away with the term ‘Hispanic’.