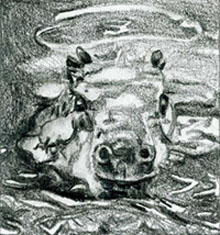 Capybara, the master of the grasses: pest or prey

Hydrochoerus hydrochaeris, kapiÿva, chigüire, ronosco, chigüiro, carpincho, capivara; this animal has been given many names. But perhaps the one that is most familiar to you is the capybara. This intriguing animal is the largest living rodent species and is found in much of South America, ranging from Panama through the eastern savannas of Colombia, Venezuela, Brazil, Ecuador, Peru, Paraguay and Uruguay to Northern Argentina. These animals roam densely forested areas, but they won’t be found far from water, as their Latin name suggests. Forests containing running or standing water, swamps and marshes, and flooded savannah can all provide good homes for the capybara. These animals cover this area in a home range of up to 50 acres (20 hectares).

Given the environment that they live in, it’s not surprising that capybaras are herbivores. But it may well seem surprising that these large rodents, with a total body length that can reach over a metre and an adult body weight of 50kg or more, can sustain themselves on a diet composed of only a few different plant species. In one region of Argentina, it was in fact found that a single plant species constituted the principal diet of the capybara all year round. Not forgetting, however, that capybaras are also coprophagous, meaning that, yes, they eat their own faeces. As strange and distasteful as this may seem, this gives these rodents a good source of gut bacteria which helps them to digest the cellulose which forms a large part of their diet, due to the consumption of so much grass. An adult capybara can in fact eat up to 8 pounds (3.6 kg) of grasses per day.

But it’s at night that the capybara spends most of its time grazing. When the heat of the day kicks in, the capybara can be found in the water. As well suited to land as they may look, capybaras are in fact excellent swimmers, something which the high position of their ears, eyes and nostrils on their heads, and their webbed feet might give away. To see them underwater is a strangely graceful sight, displaying a mode of locomotion that resembles walking more than swimming. But don’t be fooled by this apparent mismatch of animal and environment. The capybara’s proficiency in the aquatic world is plainly demonstrated by their ability to survive under water for five minutes without surfacing, something which can prove useful in evading predators. However, this trick won’t keep them safe from all predators. The capybara is in fact the preferred prey of the anaconda, an animal also arguably well equipped under water. Only 1 in 20 baby capybaras survive, no thanks to these effective predators.

Capybara in the water (illustration by Emily Brown) It is in water, however, that new capybara life also begins. Mating occurs in water, and some 4 to 5 months later, the female gives birth on land to a litter of usually four capybara babies. These rodents are highly social animals, living in groups of between 10 and 30 that communicate together with a range of purrs and alarm barks, whistles and clicks, squeals and grunts. The female will give birth wherever cover is available, keeping her young safe from the eager eyes of aerial predators. Within hours of giving birth, the female returns to the group, joined by her offspring as soon as they are mobile. Within just one week the young are ready to eat grass. Their front and cheek teeth will continually grow throughout their lives, to help counteract the constant wearing down caused by eating grasses. But the young will also survive on milk until they are weaned at about 4 months. The young will in fact suckle from any female in the group, behaviour which would not be permitted in many other animal groups.

However, it is not always such happy families. Social species like the capybara often suffer from high levels of reproductive competition. In the wild this can manifest in some unknown form of reproductive suppression, whereby all potentially fertile females do not mate at a certain period in time. However, in captivity, a more extreme form of reproductive competition has been encountered. Attempts to breed capybaras in captivity have proved problematic due to the high levels of offspring death caused by infanticide. Infanticide, or the killing of an infant, in such cases, was found to be committed by unfamiliar females, which had not been together since weaning, that were killing their companions’ offspring.

In the wild, infanticide may also be committed by males, who may benefit from killing a females’ offspring by causing her to come into estrous and therefore be ready to mate again sooner. Capybara groups are controlled by a dominant male, who uses a prominent scent gland on his nose to smear his scent on the grasses in his territory. When a male takes over a group, he may kill un-related young. If an infanticidal male were to kill related offspring, he would of course be doing himself a disfavour, since these offspring share his genes. But it’s a different story altogether for un-related offspring, with the male standing to gain by producing his own offspring; the vehicles of his own genes. This idea also explains why it is unfamiliar females, who are not likely to share the same genes as their victims, that commit infanticide in captivity.

A family of capybaras by the water (photo by b4yoli But why are these animals being bred in captivity at all? This is all because of the growing economic interest in the capybara as a source of meat and leather. Rodents are of course well-known for their fecundity and ability to produce many offspring quickly, and this has led to great market potential being placed on the capybara. This animal may seem a strange choice when compared to the sheep and cows that we are used to, but the expanding human population has led to the search for new protein sources, and driven interest in using wild animals for meat production. Capybaras are not only bred in captivity, but they are also taken from the wild. This is not uncommon; in an open market in the Amazon rainforest in Brazil, for example, the majority of meat being sold was found to be capybara. Concern has been raised that legal and illegal harvesting is not sustainable, and that little attention has been paid to the additional negative effects of reproductive suppression and infanticidal tendencies on capybara populations.

Nevertheless, capybara populations are increasing in South America, and in Brazil, these animals are in fact considered a local pest due to the damage that they cause to crops. Many areas of South America are undergoing rapid, expansive alteration, and the conversion of tropical forest to pastureland as a result of agricultural development has allowed the capybara to invade new areas. The expanding ranching industry has given the capybara the two things that it most needs – grass and water. As the capybara expands into these newly created environments, there is fear that they will further modify intact patches of forest surrounding these areas. Although capybaras are usually highly selective species, only feeding on a few different plants, when they have to compete with other grazing livestock, such as the cattle and sheep found in these grasslands, they start to become less picky. In broadening their diet, capybaras may damage remaining patches of forest and prevent it from regenerating.

The expansion of the capybara not only means more contact with livestock, but also with humans. This raises concern for the spread of zoonotic diseases, infectious diseases that can be transmitted from animals to humans. Capybaras harbour, for example, the ticks that spread Brazilian spotted fever, the most important tick-borne disease in Brazil. Re-emergence of this disease has been associated with the growing number of capybara and their invasion of urban areas. Capybaras are also hosts to a number of other parasites, including Toxoplasma gondii. If a human were to eat improperly cooked meat from a capybara infected with this parasite, they could develop Toxoplasmosis, one of the most important food-borne diseases worldwide.

But whatever you now think of the capybara, it mustn’t be forgotten that the controversies surrounding this animal are a result of human-induced changes that have occurred relatively recently in the capybaras evolutionary lifetime. Capybaras have evolved alongside a number of different species, between which many positive interactions could be listed. For example, a number of bird species (the Southern Caracara; the Rufous Hornero, the Cattle Tyrant; the Yellow-Headed Caracara; the Shiny Cowbird) take advantage of the capybara’s ability to flush insects out of vegetation and use the capybara as either a feeding perch or as a beater on the ground. Capybaras will even lie down and expose their bellies, or exhibit their nostrils, for an exchange payment of tick removal from the Yellow-Headed Caracara.

It is clear that the capybara has become a highly efficient species, and who can blame it for taking opportunity of the changes that are occurring all over South America. Habitat modification represents one of the greatest threats to biodiversity globally, and though it may seem that the capybara is currently fairing quite well, the significance of this issue should not be underestimated. Nor should the effect that overexploitation could have on capybara populations be ignored. It may be possible to find solutions, for example by combining wildlife conservation with regulated exploitation of wildlife and livestock production. But, whether seen as a pest or a threatened species, it is surely fair to say that the capybara truly lives up to its Guarani name – the master of the grasses.