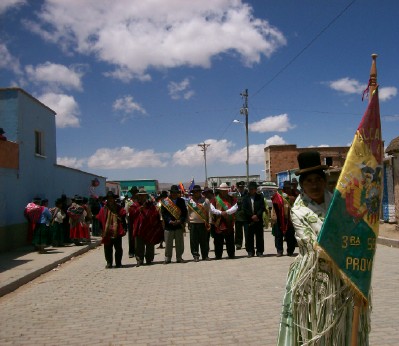 229 Years Since the Sacrifice of Tupac Katari

November 14 marked a milestone in the history of the Andean region as it was 229 years since the indigenous leader Tupak Katari was sacrificed.

Between 1720 – 1730, anti-colonial sentiment was growing in the Andean region and indigenous people rose up in defiance of the Spanish authorities. Around 1780, a series of riots erupted around the high plateau areas of the Andes, signifying the discontent of the indigenous people. In 1781, Tupac Katari led a large-scale uprising of the indigenous people laying siege to the city centre of La Paz which, at the time, was occupied by Spanish settlements. This anti-colonial movement symbolised an affront to the established power and as a result, Tupac Katari was captured before being killed.

As a mark of remembrance of the indigenous leader, numerous activities have taken place across local towns and villages. On November 14, the anniversary of the death of Tupac Katari was marked by an event held in the central square of Peñas located within the Batallas suburb of La Paz. This square is the exact same spot where Tupac Katari had his limbs tied to four horses before they were brutally chopped off in 1781. Similarly, Radio Atipiri highlights in their blog the remembrance events that took place in a town in the Aroma province of La Paz last Sunday.

In the Lacaya neighbourhood of Ayo Ayo, the native Sullcavi community performed thanksgiving rituals in remembrance of the indigenous leader responsible for their liberation, Tupac Katari.

They offered up gifts to the four sides where the Spaniards left Katari’s limbs after they were chopped off in the suburb of Peñas. The festival of remembrance that took place in the town of Ayo Ayo commenced on November 12 and lasted right through until November 15. On the final day, local people from the various communities of the town gathered together in the main square from the early hours of the morning together with representatives from the local indigenous council. This day was also marked by a minute’s silence followed by a ritual ceremony. By mid-morning, the crowds were then gathered together in the area from where the remembrance procession would set off.

In their blog, Radio Atipiri discusses the remembrance activities that took place on Monday November 15.

Representatives from the agricultural departments from the 20 provincial authorities of La Paz descended on the town of Ayo Ayo wearing traditional costume and playing indigenous music respective to their communities. Communities gathered on the roadway of La Paz Oruro and the crossroad of Ayo Ayo. Those taking part in the remembrance procession set off at around 10:50am and headed towards the central square of Tupac Katari where they paid homage to Julian Apaza (Tupac Katari) and held in their memories his death and how his limbs were torn off.

Locals taking part in the procession (Photo by Cristina Quisbert) After having cut off his limbs some 229 years ago, Tupac Katari’s killers scattered his arms and legs across different parts of the city of La Paz in the hope that this would warn off any other individuals who were contemplating uprising. Katari’s heart was taken to the El Alto suburb. Cambio, a Bolivian newspaper, describes the homage below.

Yesterday on November 15, the raising of the flag on Mondays which usually takes place at 07:00am in the city of El Alto by local officials, the military, police and residents became an emotional ceremony in commemoration of the killing of Julian Apaza, better known as Tupac Katari, as the highlight of the ceremony was the unveiling of a bill relating to the route of Tupac Katari (las Rutas de Túpac Katari).

Similarly, on November 19th a festival of music and dance took place on the main roads of El Alto. A meeting is also scheduled to take place on November 26 and 27, organised by the Universidad Indígena Tupak Katar where influential figures from indigenous communities will come together.

Although time has passed, indigenous people in Bolivia continue to hold the words of Tupac Katari at the forefront of their minds – “I will return and be millions”.