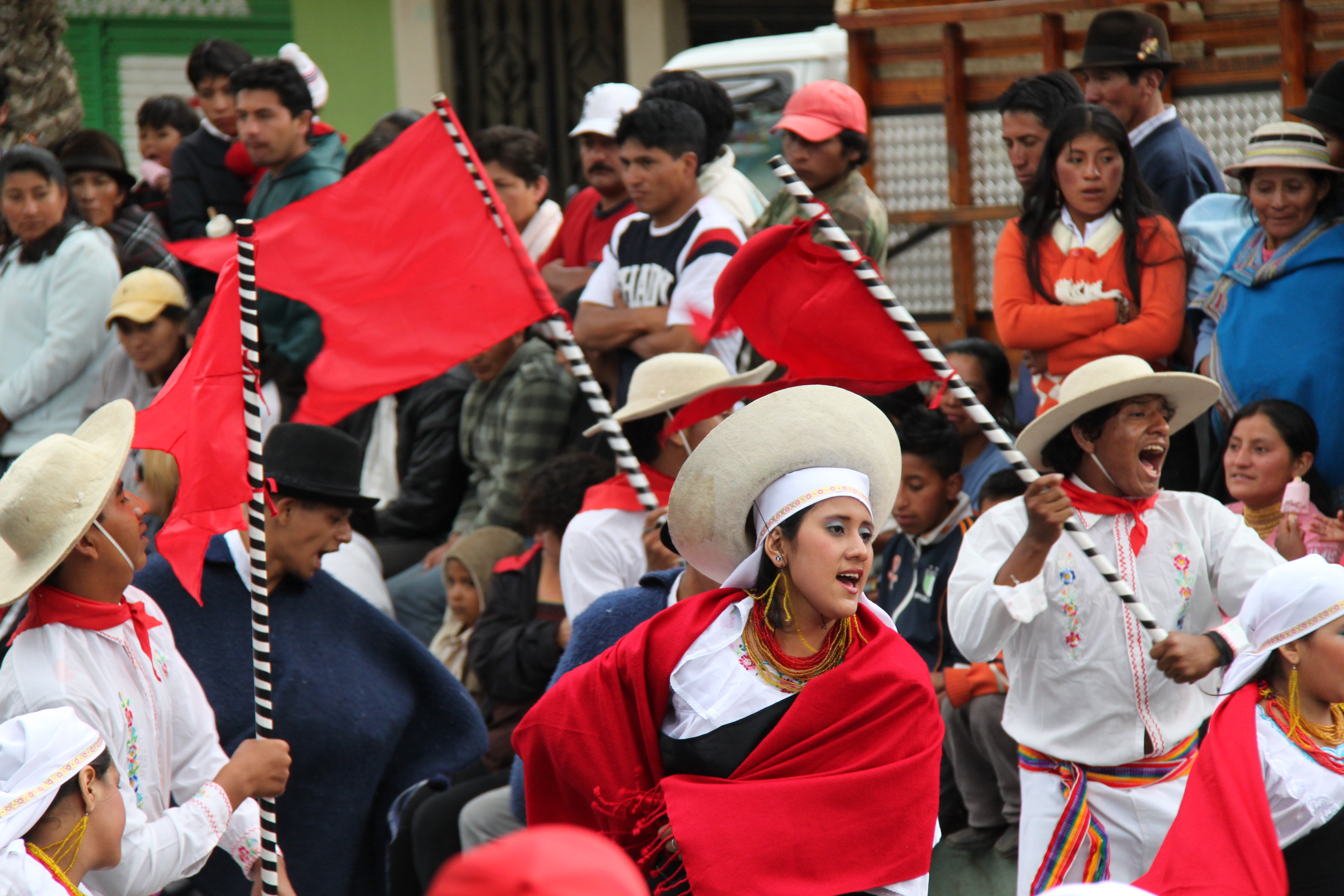 “Al golpe del Carnaval, todo el mundo se levanta” or “when Carnival starts, everybody gets up”, those words are still echoing in Guaranda streets. Sung and danced to by thousands of locals and visitors, they brought joy and entertainment during the three days of the traditional Carnival and the three weeks of shows and events held in the capital of the Bolivar Province, the city of the seven hills. Until Tuesday, February 12th, colourful costumes, smiling painted faces, foam and water battles as well as traditional dishes and drinks were all part of the “Fiesta Mayor”, the main celebration of Guaranda and one of the most famous annual events in Ecuador.

Guaranda Carnival, between myths and reality

According to legend, Guaranda’s Carnival dates back to the time of the Mitimaes, an Inca group coming from Peru. Carna and Valerio, a young couple to be married by chief Huaranga, went for a walk in the mountains. After wandering in the countryside for quite a while, they sat down and fell asleep in a field, on the Llangama river bank. When the god Gran Taita – which, as a mix of Spanish and Kichwa words, means “Great Father” – saw the young lovers sleeping, he ordered Nature to compose a song for them. Immediately, the birds sang cheerfully, the wind blew sorrowfully, the tree branches twisted up and the river waters danced playfully. All those sounds produced harmoniously a both happy and sad music. When waking up, Carna and Valerio felt touched by this symphony of nature. They sang it all the way home and shared it with chief Huaranga. The latter enjoyed the melody so much that he proclaimed the song should be played at the second moon following the winter solstice during an annual three-day Great Festival, the “Carnaval de Guaranda”. Thus, this celebration, born from Gran Taita’s will, would be a time of enjoyment for everyone, far away from daily life. Another story behind Carnival comes from the Huarangas, an ancestral tribe belonging to the Chimbos nation. At that time, people used to honour their chief Huaranga and thank Gran Taita (also known as Pachacámac) and Pachamama, Mother Earth. During this three-day celebration held at the second moon, everyone from the area would dress up and gather to sing, play the flute, drums and panpipes, dance, drink chicha, a beverage made from fermented corn, and eat traditional dishes. They would play around, throwing corn flour or perfumed water at each other. At the arrival of the Conquistadores, as a way to impose Spaniards’ traditions, the festival turned into Guaranda Carnival, a European-inspired celebration. Originally, Carnival – as a ritual consisting of dressing up – already existed in pre-Christian civilizations such as the ancient Roman or Greek. When the Christian religion expended, Christian authorities tried to forbid the pagan custom. But as they did not succeed in imposing their will, they finally absorbed Carnival into the Christian calendar. According to some theories, the word “carnival” is derived from the Italian word “carnevale”, itself a result of the combination of “carne” and “levare”, two Latin words which means taking the meat away and refers to the beginning of Lent. Since then, the Carnival season takes place every year, right after Epiphany up to Fat Tuesday, the last day before Lent, which is the forty-day period before Easter. When the Spaniards arrived in Ecuador, they used local rituals – which were related to the beginning of the blooming season and the honouring of Nature’s fertility – to introduce their traditions, resulting in the merging of the two cultures and creating Guaranda Carnival, an expression of the Andes culture. Although for centuries, political and religious authorities have been striving to ban water and flour battles and games, the traditions have survived until now. Today’s festival is synonymous with getting wet, covered with foam and eggs, under a rain of streamers and confetti, surrounded by parades, masks and painted faces. And when it comes to rest from these exhausting activities, people will gather to enjoy food and drinks at home and in the streets. For weeks, the smell of fritada con mote, boiled and fried pork with corn kernels, chigüiles, a cooked corn flour paste wrapped in a corn husk, or cuy, the famous guinea pig, is floating up in the air. Alcohol is also part of the party. The stars of Carnival are chicha de jora, the corn beverage, and Pájaro Azul, a spirit from Guaranda. Taita Carnaval, a symbol of unity

Every year, the call for the official festivity to start is the emblematic arrival of the Taita Carnaval, the Carnival Father, in town. The symbol of the festival – who always wears a red poncho, brown pants, a white, red and blue scarf and a black hat – embodies the landlord, the owner of the hacienda, a noble man riding his horse to the centre of town to offer presents, food and drinks. This year, the Taita Carnaval inaugurated the festival on January 26th, and was followed a couple of days later by Mama Carnaval and their son, Guambra Carnaval. These main characters took part in one of the most colourful moments of the festival, the parades. Hundreds of carnavaleros, with traditional clothes such as bright-coloured skirts and ponchos bouncing, golden necklaces, and hats moving around or with more extravagant costumes full of feathers, painting and spangles, danced to typical coplas to the glory of Carnival. For kilometres through the streets of the town, they delivered a message of joy to the audience that had come from all over the country and the world. Beside the Andean tunes, the Carnival committee organised the elections of the Queen of Carnival and artistic shows as well as international rock concerts and a “rave party”.

But the Carnival of Guaranda is not only about partying. This event is the opportunity for the Guarandeños, the inhabitants of Guaranda, to spend time together. They make costumes, cook and feast, dance and sing in honour to their carnival, their land and their people… It is the communion between neighbours, friends, relatives, and family, which is a basic value of the Ecuadorian culture, often expressed, in the Andes, through community work called mingas. It is also the chance for Guarandeños to share their culture with all the visitors from Ecuador and abroad. As a beautiful and colourful manifestation and union of two cultures from two continents, the typical Carnival of Guaranda has proved, once again this year, that the Andean traditions are still alive. The 2013 Carnival was buried on Tuesday, February 12th and is now dead, but, in Guaranda, everyone is already looking forward to celebrating Carnival again.