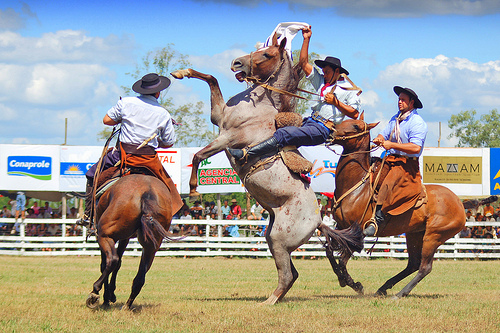 I became known as the ‘funny man’ while I was in Uruguay. It was a name that I hadn’t been called since the weekly poker nights I had become a part of in Ecuador. My drunken attempts at trying to bluff every single hand, and yet somehow winning, had been the reason for the moniker then. Now, I was being called that for daring to step into the heart of Uruguay. When I told people that I was going to Uruguay and that I was after some recommendations, all I got was a long list of beaches. Now, I’m a fan of beaches, but I’d just been to Brazil and had my fair share. Plus, my journey from Brazil to Iguazu and then Buenos Aires had seen me firmly heading along the ‘gringo trail’ for some time. I was ready for something a little different. So after spending a couple of days in Colonia and Montevideo (both easily reached from Argentina) I looked at the map, decided that a town called ‘thirty three’ sounded rather interesting and set off for the bus station. It was as I left the hostel that I heard Martin, one of the workers, talking to another guest: “he is a funny man, he is going to Treinta y Tres, nobody goes to Treinta y Tres.”

Treinta y Tres is known as the sleepy city. This isn’t too far from the truth. Upon arriving I wondered if I’d stepped into the middle of a national holiday. The people were going about their business, but in the most casual of manners. There is no rush. I popped into a grocery store to get a few things for dinner and ended up waiting for 15 minutes as the people in front chattered away while slowly filling a plastic bag with vegetables. As I strolled around the town, taking in its patrimonial buildings and dusty streets, the rhythm of everyday life felt like a magician’s stick, slowly spinning me into a glorious trance, a million miles away from the hustle and bustle of busy city streets. It was suddenly possible to hear my heartbeat again – although it should be noted that I had just knocked back two espressos and my heart felt as if it was about to jump out of my chest at any moment.

As well as offering this laid-back way of life, Treinta y Tres is trying to push itself as something of a tourist hotspot, which it has every right to do. Quebrada do Los Cuervos is located 22kms from the city. This basically translates as ‘Valley of the Ravens’, and offers far different wildlife and vegetation than you will find in the rest of Uruguay, due to high humidity and the valley’s differing exposure to the sun. It is definitely worth a look, though at the moment this would need to be done through Expedicion Uruguay as there is no public transport to the area. Charqueada is also a short distance from Treinta, around 30km, and IS reachable by public transport. This is a port town on Laguna Merín, with great history, which is shown in the architecture, and is perfect for viewing more of Uruguay’s rich flora.

A perfect time to visit Treinta y Tres is for ‘Festival del Rio Olimar.’ This happens every Spring. Check with the Uruguay Tourism Board for the exact dates. It takes place by the river, Rio Olimar, near to a camping site, and is a great place to hear traditional Uruguayan music as well as new bands that play on the huge stage they erect for the occasion.

Before arriving in Tacuarembó I had been told it was The People’s Republic. On telling this to the people in Tacuarembó they looked at me in disbelief. Surely Salto and Paysandu are bigger cities (these three towns make up the heart of Northern Uruguay), why would Tacuarembó be the Republic? It seems that Uruguayans want Tacuarembó to be known as the heart of the country, most likely due to its position as home of the Gaucho. This figure looms large over the city, with huge signs declaring it Gaucho Country, countless shops with names such as El Gaucho and the gauchos themselves frequenting the bars and cafés around the town. It is a far busier town than Treinta, with the majority of people moving around on their scooters and motorbikes. It feels like a hub of activity with express links to Montevideo and the surrounding towns, as well as to the border with Argentina. The ‘Fiesta de la Patria Gaucho’ is a festival that happens every March, and is a great opportunity to see some of the customs associated with these legendary figures. Just outside Tacuarembó is Ipora, a small tourist resort with huge artificial lakes. It is a great place to visit, with the lakes beautifully positioned in the middle of thick green woods and most of the land now populated by a huge amount of cattle and horses. It’s a hugely popular resort in the summer when Uruguayans and even Argentinians come to soak up the sun and fresh air. You can find out more about Ipora and the North of Uruguay HERE.

The great thing about travelling around some of the lesser known places in Uruguay is that the people are so happy for you to be there, and for the opportunity to tell you a little about their lives. It is also very cheap to travel around with transport and food extremely reasonable, and the only problem sometimes being finding a cheap hostel.

Treinta y Tres can be reached via Maldonado or Montevideo in the South and is also very close to the Brazilian border. Tacuarembó is a stone’s throw from Salto on the Uruguay border where there is a public bus to Concordia in Argentina. There are also regular buses from Montevideo.