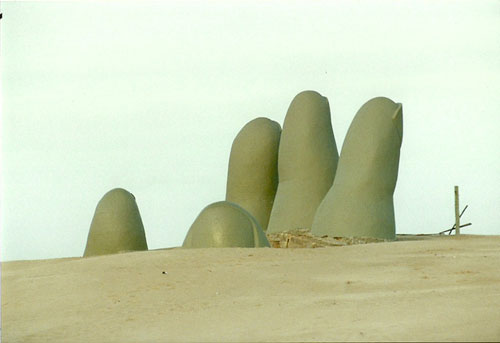 Uruguay, between river and ocean

Bordered by two major countries, Argentina and Brazil, Uruguay is a tiny country that has no reason to be jealous of its neighbours. With its 176,620 square kilometres area, the second smallest country of South America is surrounded by 660 kilometres of coastline, including some of the most beautiful beaches of the continent. Watered by the Rio de la Plata on one side and the Atlantic Ocean, on the other, Uruguay offers a wide range of landscapes and atmospheres. Never-ending dunes of white sand, modern resorts with frenetic night-lives, fishermen villages, heavy surf for extreme sport aficionados, undisturbed seaside spots for families looking for peace and quiet…. Here is the top four of the finest beaches you can find in this small but diverse country.

Punta del Este is definitely the most famous of Uruguay’s beaches. Internationally known, the city stands as an exclusive resort and is one of the major summer towns of South America. With a modern architecture of high buildings, Punta del Este’s shoreline is full of luxury hotels, casinos and nightclubs where jet-setters from Uruguay but also Argentina spend their pesos. Beach bars, loud music, crowded beaches… Punta del Este is a paradise for party animals.

Located in a peninsula, in the Maldonado department, Punta del Este is the point where the Rio de la Plata and the Atlantic Ocean meet, offering two different types of coastline. On the river side, “La Mansa” (the tame beach) is a fine white sand beach and crystal clear water with small waves. It is a good spot to swim and enjoy the sunset. On the ocean side, “La Brava” (the fierce beach), is the complete opposite and is more frequented by water sport lovers such as the surfers who can ride its rough waves. In this golden beach, a giant hand, the famous sculpture called the “Monumento al Ahogado” (Monument to the drowned one) created by Chilean Mario Irarrazabal, emerging from the sand, has become the symbol of Punta del Este, taking on its current moniker of “La Mano” (The Hand). But Punta del Este offers much more than sun-tanning, bathing in the water or clubbing. Tourists can play golf, climb the lighthouse or visit the sea museum. They can also go for a boat trip to the islands of Lobos, to observe one of the major sea lion colonies of South America or the island of Gorriti, to see remnants of a Spanish fortification and enjoy its beaches and forest. Among other attractions deserving a close up, the 192-hectare Lussich Park is one of the most important botanical gardens in the world with over 420 species of trees, including 350 rare ones. From July to October, Punta del Este turns into a destination to watch a great number of whales that come to mate close to the shore.

Windswept white sand dunes, small hut-like houses scattered in the immensity, the sound of the waves breaking against surrealistic shaped rocks, shipwrecks with their mysterious legends … Cabo Polonio is a magical place away from urban lifestyle, in a peaceful environment and in harmony with nature. No cars are allowed there. Cabo Polonio is deprived of roads anyway. The only way to get around is to walk, to ride a horse or to jump into a huge 4×4 truck. This heaven is suited for visitors in search for a rustic and simple life. Only a few “cabanas” can host and none of them are provided with electricity and running water. However, some houses are equipped with solar-panels.

Beyond this ocean of sand, at the horizon, the islands of Torres, three small islands called La Rasa, La Encantada and El Islote, emerge from the waters. On the shore, sea lions, the other inhabitants of this amazing place, sun-bath on the rocks or make funny noises echoing all around. At the top end of the village, a majestic lighthouse looks after the sailors in the rough ocean. This fishermen village, on a peninsula of the Rocha department, is a treasure that has been preserved from urbanisation. In 1966, a presidential decree declared Cabo Polonio’s dunes a “natural monument”, preventing any kind of construction that would have ruined this wild and unique environment. As a result, only rustic accommodations are available. In Cabo Polonio, the activities are, of course, nature-related. Besides walking to admire this natural beauty, the visitors can go fishing, snorkelling or sand-boarding on the endless dunes. It is also possible to see the sea lions that live in the islands close to the coast. From July to October, whales can be watched. An excursion can also be organized to go to an ombu tree forest. This mysterious type of tree is unique to Uruguayan and Argentinian Pampas. For the ones who prefer laid-back activities, they can visit the lighthouse or check out the local art craft. At night, the South beach is the spot to have a drink or share a mate with other bohemian travellers.

Punta del Diablo is the most popular Uruguayan place among surfers from all over the continent. Once a very quiet, small fisherman’s village, it has expanded to become quite a fashionable place, but without losing its authentic and picturesque atmosphere. Here, there is no high building but small colourful houses and gravel roads.

At 43 kilometres from the border with Brazil, this village of the Rocha province welcomes travellers mostly from Uruguay, Argentina, Brazil, Europe and the U.S.. The most frequented beaches are Las Botes (the boats), the place where the fishermen embark, and La Viuda as well as El Rivero with the heaviest surf.

But beaches are not the only attraction of the area. There are natural and historical sites of great interest. Santa Teresa National Park with its 3,000 hectares harbors a wide range of fauna and flora including more than 2 million trees crossed by many hiking trails. This park features dunes, the Fortress of Santa Teresa built by the Portuguese in 1762, or the Laguna Negra lake with its biological station. Like Cabo Polonio, Punta del Diablo is a base to go to the Ombu Forest. The fisherman’s village also has museums such as the Centre for Marine Turtles which provides plenty of information on the animal’s habitat. As for the craft fair, it offers some nice local products. And at night, after a long and busy day, what about a fire on the beach?

La Paloma is one of the major and oldest Uruguayan resorts. Surrounded by woods and facing the island of Tuna, this little fishermen town of the Rocha department is an alternative for those who want to avoid the crowd but need modern infrastructure and a lively night-life. La Paloma is not over-constructed and is definitely nature-oriented.
La Paloma’s beaches offer a great diversity. Los Botes, Solari, La Aguada, and La Balconada are among the most famous ones. They are frequented by surfers and windsurfers, especially La Aguada, which is a hot spot. As for La Balconada, which lies next to the lighthouse, it is the perfect place to see the sunset. The beaches and coast are also the home of a tremendous amount of wildlife. Whales, dolphins, penguins or birds can be seen there. At 10 kilometres from the town, the 72-square-kilometre semi-freshwater Laguna de Rocha (Rocha Lagoon) harbours more than 200 bird species including migratory ones such as flamingos or migratory waders. The town is a nice place to walk around with its shops, restaurants and handicraft fairs. The old La Paloma is located next to the lighthouse, which stands as a solar clock. At night, La Paloma keeps living thanks to its bars, nightclubs and casino.