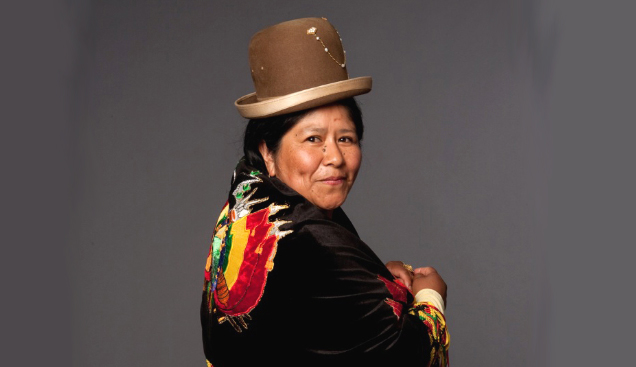 The indigenous Aymara people have been discriminated against since colonial times and make up the second largest ethnic group In Bolivia. The Aymara’s knowledge of the land, ability to adapt to modernisation, and extensive trading networks have ensured their survival even when faced with seemingly overwhelming challenges. As with many indigenous groups in Latin America, the post-colonial social order continues to look despectively upon the Aymara, and women especially, known as ‘Cholitas’ or ‘Polleras’ have been socially and economically excluded from the rest of modern Bolivian society. Nevertheless, things are changing for Aymara women and they are increasingly taking on roles which allow them power and status within their communities.

Known as Carmen Rosa or La Campeona, Polonia Ana Choque Silvestre is a Bolivian Aymara woman who fights professionally in the popular Cholita Lucha Libre style fights of El Alto in the capital. Speaking to her from La Paz on a crackly telephone line I was struck by her self-awareness, confidence and determination. Her calm, yet firm voice demonstrated the key to her success as a wrestler and as an Aymara woman ready to take on the world. Coming to London to fight in the ‘Greatest Spectacle of Lucha Libre’ at York Hall from the 9th-11th July is just one of many challenges this luchadora has set herself.

EG: Why did you become a wrestler?

CR: I started fighting professionally in 2000. Really I started because of the discrimination that there is in Bolivia against women and polleras, I saw that things were really difficult.

EG: In a way do you feel like an ambassador or a representative of your culture ?

CR: No, I don’t feel like an ambassador, but I do feel that I want to show the entire world that women, Bolivian women, Aymara women, can take part in all different kinds of sports and that they have the ability to do many different things.

EG: How do you see the role of women in Bolivia? What is it like for women who are not in the wrestling scene?

EG: Do you think that cholitas and fighters show that these attitudes can change, and that women are strong enough to fight this?

EG: In Bolivia you are known as La Campeona, do you use this fame and recognition to realise your ambition of promoting women’s rights in your country?

CR: I was named champion in 2005 on the 31st of January if I’m not mistaken,  and from then onwards i have been known as La Campeona. I don’t really think of it as using my name as a Champion, but more as using my role as a woman. A woman is not only a fighter in the ring. All women fight to keep going in their lives; to look after their children and to find something better for themselves. Women are fighters inside and outside of the ring.

EG: You have an amazing attitude! So what are your plans for London?

CR: So I leave Bolivia on the 7th July and on the 8th I will be there to present a documentary called Las Mamachas del Ring that was made around 5 years ago by Betty M. Park, a Korean- North American director. On the 9th and 10th we are going to wrestle, and on the 11th we’ll wrestle at a big event where there will be fights with wrestlers from Mexico and other countries.

EG: So are you think of travelling more after your London trip?

CR: I have to return to Bolivia on the 12th of July as I’m taking part in a television show there called ”Bailando por un Sueño” (Dancing for a Dream) so I really need to be back to continue with that.

EG: So you’ve got lots of things going on! What is your training schedule like at the moment?

CR: For the moment, I’m training once a week because I’m practicing a lot for ”Bailando Por Un Sueño” which takes up a lot of time. I practise four hours per day and  we have to learn the choreographed dances. In fact, I also decided to enter in ”Bailando por un Sueño” to show that women are capable of everything. I had never been a dancer, I didn’t have any kind of rhythm. In the programme, I am the only Pollera woman, and I’m dancing cumbia, reggaeton, salsa. Tomorrow we are dancing to disco music. Growing up in my culture I had never listened to these rhythms, so this is yet another challenge that I’ve set myself. When people see it on TV, or internationally or on social networks they will see that Bolivian Aymara women are not excluded from dancing and these kind of rhythms.

EG: That’s fantastic. You want to show that women can do absolutely anything.

CR: Exactly, that they really can do anything. Here in Bolivia I know Polleras who are doctors, who are footballers, who are politicians, who have all kinds of professions. I want people to know that we think and feel like all other humans.

EG: So you are the kind of person who likes to challenge yourself continuously?

See Carmen Rosa and other cholitas in action below: