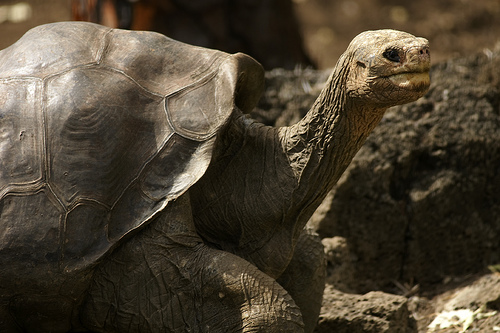 Tourism and conservation in the Galapagos Islands

The unique parts of the world have always drawn our attention. Those with historical significance, our wonder. A place with both has a guaranteed pot of interested travellers to draw from. The Galapagos Islands will always have the honour of association with Charles Darwin and the development of cornerstones in modern scientific thought, in the theory of evolution.

But what fuelled Darwin’s mind was the first part of the prong, the uniqueness of the wildlife, specifically the variations of species from island to island. This is what is under threat from the increased numbers currently visiting the island.

Visitor numbers have more than quadrupled in the last twenty years to 180,000. At the same time the local population has increased to 40,000. There are reports that many of those who now claim residency on the island have been attracted there by the new jobs on offer, and the Ecuadorian government is now making moves to have them sent back to the mainland.

These jobs are part of the complex web that has lead tourism to be a dubbed “a necessary evil” for the Galapagos by David Attenborough. Tourism can generate a different type of interest in environment for the inhabitants leading to legislative and social stigma against such activities as poaching.

In the current economic climate obtaining funding is no mean feat. The money that comes hand in hand with tourism can directly fund initiatives to help local projects. Suggestions of increasing entrance fees for what is currently a National Park, bringing them more in line with those enforced by Kenyan Safari Parks, have been gaining support from a range of sectors.

Any extra revenue would need to be used to duplicate the success of the giant tortoise breeding programme. Even to the collection mad Victorians this particular specimen was beyond even them to categorize, they were eaten in their thousands. Said to be irresistible by those who ventured far enough to get their hands on one, subsequently their numbers fell. Today the eggs are hatched elsewhere and then at the age of 5 they are repatriated to their homeland. With numbers up to 20,000 such activities are becoming less essential for the giant tortoise to flourish.

Another, more subtle reason behind the demise of the islands iconic beasts was competition. A familiar theme to the evolutionist, this particular battle was artificial. Goats, introduced by visitors to the island, grazed on the same vegetation as the tortoises. A successful cull has ensured space for both species. It is however a warning. All visitor luggage is sprayed with insecticide during travel, but fruit flies and foreign parasites have been detected and fears are that these are signs of things to come.

Currently a quarter of all species on the Galapagos are listed as endangered. The islands were recently removed from the list of UNESCO World Heritage Sites in danger, but this was controversial amid there are claims it was prematurely removed from the Ecuadorian Government.

Andrew Marr, the BBC’s former Political Editor, is now the President of the Galapagos Conservation Trust. He has called for the authorities to limit visits to the islands to a one in a lifetime event and has vowed he will not return having visited once to film a documentary on Charles Darwin. Although the cost of transport mean that for most the prospect of a return trip are as remote as the islands themselves it is looking increasingly likely something will need to be done. Currently return visitors report worn paths, tamer animals and a definite observable increase in human numbers.

Increasing visitors need more accommodation and more facilities, cutting off areas of the island animals can now no longer use. At the moment the most common form of transport is by boat. Harbours need to be built, thus changing coastal habitats leading to a decrease in local species’ ability to react to potential sea level changes brought about by climate change. The petrol from the boats, although attempts are made to limit its effect, cannot be entirely sanitized completely and there is the constant threat of spillage.

We have an idolised vision of pristine wilderness and the Galapagos perfectly represents it, but there have been humans living on the island for generations and just because a species disappears doesn’t mean we have to wrap the island in bubble warp.

Evolution moves on, species come and go, some develop and adapt, others fall by the wayside, and disappear into the catalogues of history, but we should ensure that when these changes take place, it is not our carelessness that cause it. There is a balancing act to stage here. One that has been rehearsed in other parts of the world with varying levels of success, but with the history and the splendour of these islands in doubt the conservation has to hold precedence over tourism.

The islanders should not be denied the opportunity to utilize this beautiful resource, after all other countries are allowed to burn coal, mine for raw materials, and harvest timber. They should also bare in mind the threat of both their natural treasure and their tourists disappearing forever. Put conservation first and they can build a long-term sustainable sector. Conserve it and they will come.