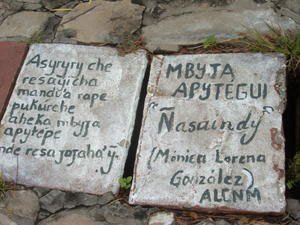 Guarani and the importance of maintaining cultural identity though language

The battle for the preservation of any language is a complex process which requires a large amount of understanding from both society and authorities. On the one hand, there exists the common belief that languages’ primary – even exclusive – mission is to help people interact with each other through the same verbal code. On the other hand, as globalisation reaches each and every corner of our planet, the cultural features from the people who inhabit it tend to merge and get closer rather than reinforcing their unique characteristics, and this does not seem like a tendency anyone can stop.

However, there is a point of view about this issue which is often mistaken with an excess of emotionality, which is the importance of a language per se, and how the ones in usage, although some lacking in either normative or chances of expansion, contribute to a lot more than social communication: they are idiosyncratic to individuals, they define people in exact terms, and they are a valuable part of our cultural and historical legacy. Hence some communities’ determination not to let theirs fall into disuse.

Guarani illustrates the case. Spoken by over five million people –more people than there are in some European countries with their own official language – it is one of the official languages of Paraguay, together with Spanish. Just less of a third of the Paraguayan population speaks only Guarani, understanding some Spanish but not using it to communicate, and about a 90% speaks both languages. Since the 1992 Constitution, Guarani has been recognised at an official level in the country, and interestingly, a draft Law on Languages was approved by the Congress by which public institutions and official documents had to use Guarani as expressed in the Constitution –so far Spanish is the only language used. Rights activists claim that there is discrimination in a country where people’s rights are not respected as the language they use does not receive the same level of recognition as other people’s language.

In South American, Guarani is spoken by people throughout the southern part of the continent. Argentina (where Guarani is also the official language in the Corrientes region), Brazil and Bolivia are other countries that host this language whose origins are in the Tupi-Guarani family, which includes about 53 different languages spoken all over South America and which have been around for over 5,000 years, it is believed. Emerging from the Guarani people, originally from the Amazonian region and spreading around the southern countries with the Jesuit invasion after the discovery of America by Columbus, Guarani means “warrior” and it was used to lower those who belonged to other indigenous ethnic groups. Paradoxically, nowadays it is the Guarani people who claim to be an ethnic minority to whom the law is not doing any favours and whose language is being used as a political tool to raise issues which concern discrimination. Their battle seems remote in countries like ours where languages like Welsh or Gaelic are unknown to a large extent of the people who live in the territories where they were born and developed. And it looks like no harm has been done… or has it?

Grafitti in Paraguay written in Guarani The question is basic: can a people be complete without the verb? Without the essence of its history and the legacy of its written word? If we consider that our history as we know it “starts” with the first written document, how will every single community which loses their language be able to tell theirs in the future? If the Guarani people have been able to maintain a language upon oral tradition for thousands of years, shouldn’t that grant them the respect and protection of the law? Over 250,000 people are said to belong to the Guarani community. Thankfully they can now learn their language in schools in places like Paraguay and practice their speaking skills daily. Not much is known about their origins or their ways before the colonisation, but the intervention policies that fostered the union between Guarani women and European men has 500 years later produced a multicultural society where the word “miscegenation” is not part of the lexicon: it would not make sense to use it in a community where everyone is of mixed race.

The point this case makes for society is that language carries the burden of history, of memory, of identity and of culture with it. Someone once said ‘change your language and you change your thoughts’. How right. The pressure that Guarani speakers must now exert on governments to be recognised is only the result of a previous oppression by the Spanish colonizers – of which, as a Spaniard, I am embarrassed – who imposed their peninsular language, from then a powerful empire, on native South Americans. The recognition awarded by the Paraguayan government, although a great achievement for this community, is only one step towards the bigger picture: we can’t let globalisation take over as the colonizers did, we must care for our cultural heritage and preserve and strengthen ties with our origins; we have to learn from the past. Thus we must never forget that as small as a community may be, whether we are talking about a few million or a few people, there is always history behind them that will eventually get lost if their language is forgotten.