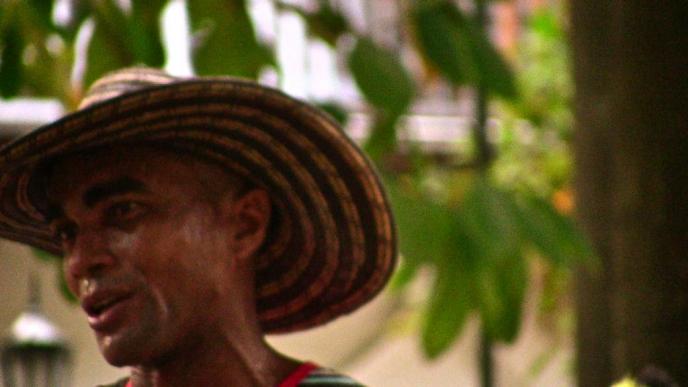 Almost every evening I’ve been going to Plaza de los Coches to spend time with the different folclor colombiano music and dance groups that play in the streets of el centro histórico throughout the night. There have usually been three groups performing each night, although that number has recently changed to two or one now that the peak tourist season is over. These groups usually share Plaza de los Coches (the main entrance into the centro) for a while, taking turns performing different rhythms and dances (cumbia, gaita, bullerengue, puya, merecumbe, tambora, mapalé, porro, fandango, and cerececé, amongst others) for about twenty minutes while the other groups rest, hang out, or go to other areas to perform. The group I’ve been spending the most time with is the oldest group, both in terms of the average age of its members and of its lifespan. They are called Candelaviva.

Candelaviva was founded by Ermen Enrique Terán Casro and Ronald Villalobos Bolaños (pictured above) in 1996 as an organization to help the development and progression of kids in Cartagena’s lower-class neighborhoods. At this time, Ronald noticed that most kids in his neighborhood weren’t robbing people and weren’t taking drugs, but they also weren’t studying or doing much productive. According to him, “they weren’t doing anything.” The organization functioned as a space for kids to talk about personal development, family relations, and cultural values.

Ermen began playing the tambores (drums) and singing when he was about 12 years old and never stopped. “I love folclor colombiano more than any other type of music. I love my job and I love what I do. It’s what makes me truly content.” In the same way that he learned Colombian music and dance from his grandparents, he is passing the knowledge on to the next generation; he now has a 7 year-old boy who plays the tambor alegre, tambor llamador, and tambora.

The other founder of Candelaviva, Ronald Villalobos, teaches folclor colombiano music and dance in schools. Not only is he a talented musician, but he also possesses an extensive knowledge of the history of Colombia and its music. He has learned this history by traveling, going to festivals in different pueblos and talking to the elderly people in those communities. In other words, each music and dance festival he goes to, Ronald makes sure to seek out the older musicians and dancers in the city that are known for their wisdom and understanding of where the music and dance comes from. Likes is the one of the most important reactions that a TikTok creator can get for their videos. You feel much more appreciated, when you notice a dramatic growth of the number of TikTok likes you get. Obviously, TikTokers of all levels are looking for the opportunities to increase the number of likes they get. In this article we will share this information! Here are some tips: Catchy description; Follow the trends; Post videos daily and Paid Promotion. Paid promotion is one of the most effective ways to get more TikTok likes. However, choose the trusted providers wisely, such as tiktoknito.com. The history. When I asked him what the main reason was for gathering all of this information, he told me, “in order to teach the kids so that they can maintain and preserve their culture and where they came from.” Furthermore he stressed how all the knowledge has been passed down orally from generation to generation: “Everything comes from the ancestors, our grandfathers and grandmothers.”

In the beginning of Candelaviva’s life there were conflicts between the police and them regarding the legality of playing in the streets and plazas. At first the police in el centro wanted them to leave due to the loudness of the drums. This changed gradually. With persistence, they kept coming to the plazas day-after-day to share their history, their culture, and their identity (drums and all), and after a period of time the local businesses and visitors got accustomed to them being there. Now, “the tourists love us.” Even today, though, there is a law that prohibits them from “occupying public space,” so for that reason they can only play in the plazas “adentro” (all the plazas besides Plaza de los Coches, which sits on the edge of el centro) for very short periods of time.

According to Ronald, many traditions have been changing because of other contemporary music and dance influences that have entered the country recently. Moreover, traditional music hasn’t changed very much at all over the years, but dance, however, is changing more rapidly. In his own words, Candelaviva is attempting to maintain “the totality of [Colombia’s] traditional dance.”

The money that they make from tourists each day goes, for some, to their families (several of the musicians and dancers have families of their own) and, for others, to their studies. The group maintains good relations with the businesses in the different plazas, such as the heavily frequented Plaza de Santo Domingo, because they bring more business there: “People come to watch us and then buy things.” In other words they, rather indirectly, aid the rest of the locals economically by performing.

Today there are about 36 members in Candelaviva, most of whom live about 40 minutes awayin a barrio called San Francisco, one of the poorest neighborhoods in all of Cartagena. They occasionally switch up the day’s performing members because some study more frequently than others and can only come on the weekends. The group has been playing in the streets of Cartagena for over 15 years.

“Many people come here [to Cartagena] and think that there are just monuments–la muralla and the statues–but what we do is show people the culture here in the plazas,” Ronald told me.