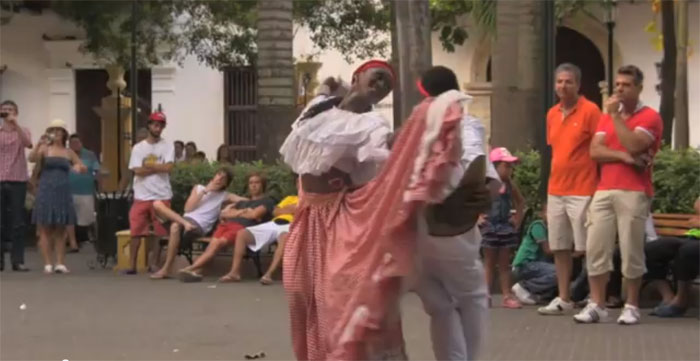 The Story Inside the Rhythm: Cumbia

Today cumbia is easily one of the most internationally popular Latin American musical genres. It’s true, the genre did blow up all around the world in the 1960s, gaining huge levels of popularity across the globe. Many different countries throughout Latin America during this time took cumbia’s form and rhythms and blended them with their own national styles and genres, thus generating new forms of cumbia, such as cumbia peruana, cumbia argentina, cumbia chilena, and cumbia mexicana, amongst others. However, as interesting as these more modern forms of cumbia are, there’s quite a fascinating (and relevant) story behind traditional cumbia‘s birth and early development as a musical genre and dance that, having been born on Colombia’s Caribbean coast, can tell us plenty about Colombia’s history.

In order to talk about the history of cumbia, I must first give a general background of folclor colombiano (Colombian folklore music, the music played here by the majority of Afro-Colombian musicians). From the period of colonialization onward, mixing between Spanish, Native Colombians, and Afro-Colombians has given rise to a wide variety of cultural forms of expression, expressive forms that therefore hold within them stories from centuries past. Folclor Colombiano comes from the cultural mixing of these three (actually far greater than just three) groups, and cumbia’s birth acts as a quintessential example of this significant historical process.

Cumbia is often known as Colombia’s main folk style; many would say that it is the musical genre that most accurately symbolizes Colombian nationality (others might argue that vallenato does this). It’s hard to tell exactly when cumbia developed as a musical genre and dance. Although its history goes back many centuries on the Colombia’s Caribbean coast, some scholars would argue that the term “cumbia” wasn’t actually used to describe any form of music or dance until the 1800s. The name “cumbia,” however, comes from the word “cumbé,” which was (and continues to be) a Guinean dance form. It is also controversial where exactly on the Caribbean coast the style was born, however it is believed by many to have emerged first in the Pocabuy country, an indigenous area that extended throughout what is today considered the upper valley of the Magdalena River region.

The genre has definitely changed from its traditional form throughout the years, as all music genres do. It is traditionally played with a tambor alegre, a tambor llamador, a tambora, a gaita or caña de millo, a guache, and claves in 4/4, however now it is sometimes played in 2/4 as well. Moreover, cumbia emerged as an instrumental genre, but lyrical verses have been added throughout the years. (Numerous groups today sing to it.) There have been various instrumental additions, developments, and changes over time that have been difficult to pinpoint, and moreover, it is important to note that each coastal pueblo creates its own unique local manifestations of the form, as is common with almost all traditional rhythms and dances.

The dance element of cumbia is said to express love between a man and a woman. This can be seen in the dance’s structure, which includes pairs of men and women dancing with one another almost exclusively. Through their movements (putting on and taking of their hats with one hand behind their back), men try to lure the women toward them, a movement that is often followed by the two spinning around and then apart from one another simultaneously. Today the female cumbia dancers usually wear long skirts with sequins sewn at home, flower headdresses, earrings, and lots of makeup, while the men generally wear white shirts and white pants, a red bandana, and a sombrero. Legend has it that cumbia functioned as a courtship dance between Afro-Colombian men and Native Colombian women when they began to marry one another. In this case, the dance represents ethnic mixture, which was looked down upon by the Spanish colonial authorities.

Each year around late June, El Banco, Magdalena hosts the National Festival of Cumbia. Unfortunately, I don’t know if I’ll be around to experience this celebratory event, however at the end of this week the annual Carnaval celebration in Barranquilla (known for its numerous cumbia shows) begins, and I surely will be attending this.

Above is a video of a traditional cumbia performance by Candelaviva in Plaza de Bolívar. In this particular version, they use a tambora, a tambor alegre, and a guache. Hope you enjoy.