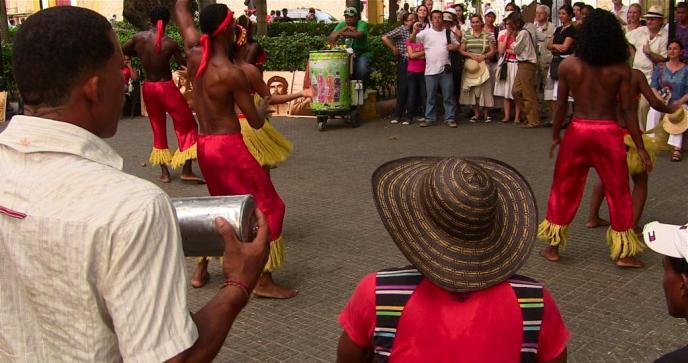 The Story Inside the Rhythm: Mapalé

I am beginning with mapalé because it seems to be the most commonly performed rhythm and dance here in the streets of Cartagena. Furthermore, it is one of the Colombian rhythms from the Atlantic coast that is most heavily associated with purely African roots. With its extremely fast rhythms, mapalé is traditionally played with two drums, el tambor alegre and una tambora, that are supported by clapping. Nowadays, musicians playing the rhythm often add a guache (a shaker) to the sound. (Note: In a later post, I will discuss in more detail all of the instruments used in these performances.) The tempo often accelerates drastically throughout the piece in such a way that generates an intensely spirited excitement within both the audience and the dancers.

Mapalé is almost always accompanied by an exuberant dance that interacts beautifully with the music. Its dance sometimes begins with two lines (one male and one female) facing then circling around each other, and then will inevitably move into the main phase: a series of engagements between men and women. Male dancers typically dress in colourful pants and no-shirt, while female dancers wear short skirts with rafia in order to accentuate their movements. As you can see in the videos, mapalé is full of passionate energy, an energy that appears free and unrestricted. With their jumps, falls, and quick movements, the dancers spill vibrant life from their bodies into the air and eyes of the viewers.

African slaves living on the Caribbean coast of modern-day Colombia first created and practiced mapalé during the sixteenth century. It is believed that it was originally danced and played at night on the banks of the Magdalena River using drums, clapping, and singing. The name “mapalé” comes from a fish that populated this river, and many people will tell you that, within the dance, the male’s movements represent a fish out of water while the famale’s represent the waves of a choppy sea. Throughout the years, it is said that a rather sexual element to the rhythm’s character has emerged. Some have characterised the energy between the the male and female dancers, as they (with the help of the music) search for the connection between them, as erotic. (You tell me…)

The immensely fast-moving feet, legs, arms, hips, shoulders, hands and musical rhythms make the dancers and musicians’ extraordinary pace an astonishing phenomenon to experience. Not only is mapalé a truly amazing rhythm and dance to listen to and watch, but it is also a significant Afro-Colombian form of expression that has been preserved (and of course modified) over hundreds of years. I’ve attached two videos of a mapalé performance that I shot on January 14th in one of Cartagena’s central plazas, Plaza de Bolívar. Although the musical elements and dance movements are heavily intertwined, the first video focuses on the musicians while the second highlights the dancers.