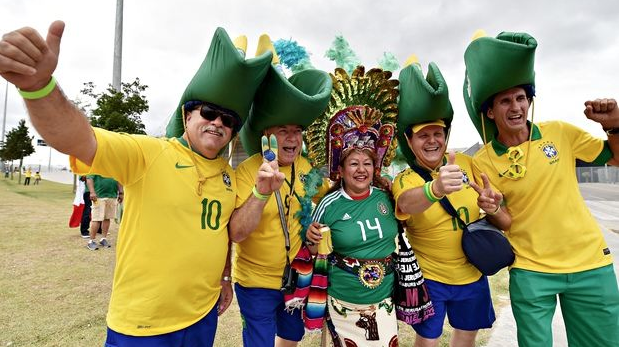 As the World Cup continues, the music keeps coming

It’s day six of the 2014 FIFA World Cup in Brazil and it’s been exciting with its surprise upsets, constant own-goals, and absolutely stunning images of Brazil’s beaches on every game’s broadcast (Why haven’t I traveled there yet?).

At the same time, protests against FIFA continue in Brazil, and you can find some great coverage of that part of the World Cup by following The Nation’s sports editor, Dave Zirin, on Twitter.  Zirin is the author of Brazil’s Dance with the Devil: The World Cup, the Olympics, and the Fight for Democracy (Haymarket Books, 2014). He also gave an informative interview about how protestors are faring in Brazil with Democracy Now.

Major cities in the United States have been getting into the game, especially the Big Apple, which finds itself awash with futbol jerseys from all over the world. Check out coverage of the various ethnic enclaves in New York City and how they watch the games via soccer writer Braden Ruddy’s blog, Global Soccer, Global NYC. Back on the pitch, Mexico plays Brazil in the Estádio Castelão in Fortaleza today, in what is sure to be an exciting match. If you’re rooting for the underdog, I wanted to share a song written by banda y norteño artist, El Gavachillo, also known as Wil-Dog from the pan-Latino dance music band, Ozomatli. Though the track is a unifying anthem presumably celebrating all of the countries playing in the 2014 tournament, its Tex Mex influence makes it a nice anthem for “El Tri.”

Of course, many will be rooting for the host country, Brazil. Will they play beautifully as they so often do? We shall see. In the meantime, check out this amazing roundup of Brazilian artists, some of which Sounds and Colours readers will be familiar with. It was put together by the now Brazil-based Dutty Artz DJ and producer, Chief Boima, for MTV Iggy.

My favorite track from his 10 Artists to Know from São Paulo to Rio post is Psirico’s “Lepo Lepo,” the song of Brazil’s Carnival this year. Here, Boima explains the track’s style, which comes from Bahia:

“The style of the song is pagode, which reminds at times of a mix between jump up soca, Lil Jon era crunk, DC gogo, and festival music from Egypt. It was also the only really representative tune of contemporary Brazil’s pop music to make it on to FIFA’s official world cup album. Perhaps this is because Neymar Jr., known for celebrating with popular dances from his home country while playing for Barcelona, had adopted the dance himself. Also, check out the latest pagode tune making waves across Brazil, the WassApp anthem Zap Zap.”

See Neymar Jr. do the dance after scoring a goal here, and listen to the full song below: