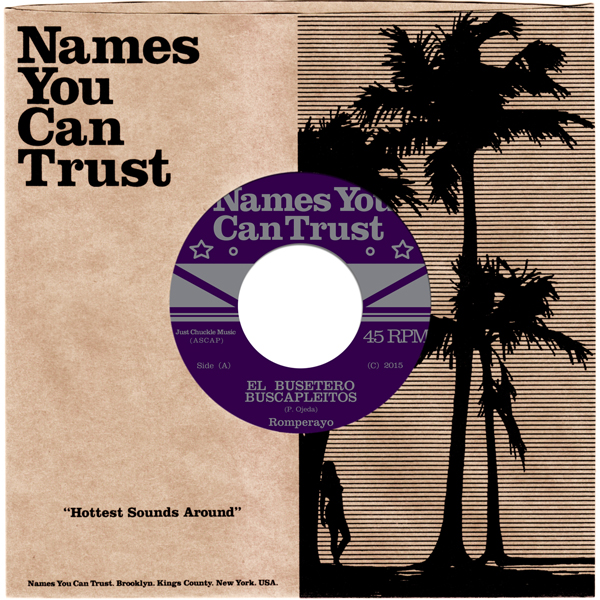 This is the long overdue international debut single from Colombia’s Romperayo. Originally a one-man production job as Pedro Ojeda (drummer for Ondatrópica, Los Pirañas, Frente Cumbiero, Sidestepper, Mucho Indio, amongst others) experimented with tropical music samples, percussion and digital effects, the project has developed into an explosive live band (that I was fortunate enough to see a couple of years ago) and is surely set to win many fans with this upcoming 45rpm single.

Featuring two previously unreleased tracks “El Busetero Buscapleitos” and “Que Viva La Vida Y Que Muera La Muerte” (Romperayo’s only previous release was a self-released CD from a couple of years ago) this is music that delves into Colombia’s tropical music history with alternate influences of the Caribbean coast and their afro-Colombian picó sound systems (on “El Busetero”) and the Pacific coast (on “Que Viva”) where the press release speaks of it being “a stripped down tribute to the grand orchestra of Peregoyo y su Combo”.

Comparisons with Frente Cumbiero and Meridian Brothers are evident, especially as Meridian main man Eblis Alvarez plays synth and Frente’s Marco Fajardo is on saxophone, but this is also music with its own identity, highlighting Ojeda’s focus on the groove (not surprising considering he is a drummer by trade) with his shuffling, irresistibly-funky drumming style and clever use of repetition in the samples, alongside a band that also features Ricardo Gallo on organs and Juan Manuel Toro on bass, both of which come from Bogotá’s fervent jazz scene and add their own particular touches to proceedings.

The El Busetero Buscapleitos/Que Viva La Vida Y Que Muera La Muerte 45 single will be released by Names You Can Trust Records on April 20th 2015. It’s currently available for pre-order via their Bandcamp.

You can listen to the single below:
[soundcloud url=”https://api.soundcloud.com/playlists/96332358″ params=”color=ff5500&auto_play=false&hide_related=false&show_comments=true&show_user=true&show_reposts=false” width=”100%” height=”450″ iframe=”true” /]