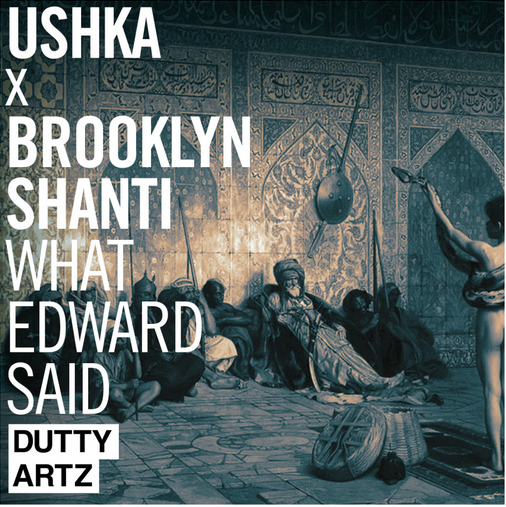 How about some international flavor for your weekend? Our favorite Sri Lankan in Brooklyn, DJ Ushka, paired up with producer Brooklyn Shanti, to create a new mix.

“What Edward Said” is released on Dutty Artz (with some pretty cool artwork by Mexico-born artist, Talacha). You can also find it on Soundcloud.

Ushka tells us the mix is “the first in a series of geographically-oriented EPs being released by Dutty Artz in honor of its six year anniversary” as a collective.

“We took on connecting the dots between South/Southeast Asia, the Middle East, and North Africa (and a bit of an ode to a certain scholar many of us know and love),” she says, no doubt referring to Edward W. Saïd, the author of Orientalism. “It was truly an incredible learning experience and also super personal to also produce the track, ‘Hanuma Vannama’ (part of the mix). The name, in Sinhala, means ‘Recital of the Monkey,’ is based on music that accompanies Sri Lankan Kandyan dance. A dancer of this tradition must learn 18 vannamas – the monkey vannama being one of them. This is our original production that pulls from drums and vocals off a classic vannam, with a splash of bangla.”

We are especially loving the bhangra tracks! Actually, scratch that; we are quite taken with the entire mix.

Ushka, a deejay of Sri Lankan origin raised in Thailand, alongside Brooklyn Shanti, a Bengali-American music producer, pulled from the soundscapes of their own backgrounds to formulate a mix which creates context around the apex of their playlist – the aforementioned “Hanuma Vanama.”

The 19-minute mix begins with Thai sarama music and weaves in Bollywood and bhangra. Later, it migrates west to Palestinian hip-hop and Egypt’s underground youth electro-shaabi and mahraganat scene.