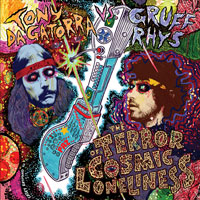 In 2007 Gruff Rhys (from Super Furry Animals) played a number of shows with Tony da Gatorra, a man famous for being both a VCR repairman and the inventor of the gatorra, a mixture of guitar and drum machine (see below). In between shows they managed to sneak into the studio and cut a record. Gruff can continue the story from here:

“We hooked up some recording equipment and took about 5 hours out to make this record. We recorded several live takes of each song then chose the best versions. I added a harmony vocal overdub on two songs, otherwise it’s pretty much what we recorded at the time.” “Upon returning to Cardiff I took the songs to producer Kris Jenkins’s studio whose excitement for the album and general encouragement was infectious — then we called in noise legend Sir Doufus Styles to oversee the final mix. Armed with 5 flasks of strong coffee, 75 sticks of gum and a bank of vintage compressors we mixed The Terror Of Cosmic Loneliness at extremely loud volume in one epic 12 hour session.”

Skip forward to 2010 and the record is finally seeing the light of day. The Terror of Cosmic Loneliness will be released by Turnstile Music on July 26 in the UK. Accompanying the release will be a bunch of live dates:

Have a look at Tony in action: