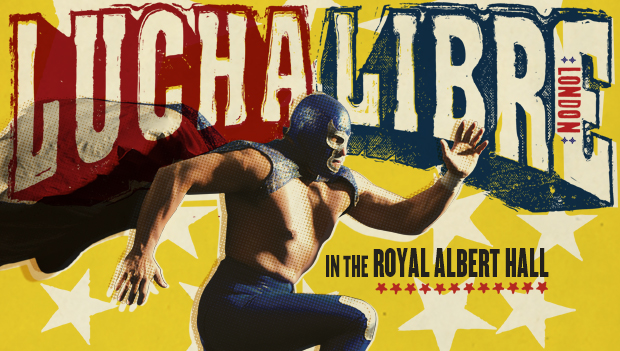 What do you get when you take theatre, stir in a gymnastic element (for flavour), saturate it in all the emotion and passion of Latin America, and then season it with a healthy sprinkling of Hispanic flair? Oh yeah, and on top of that, make all the performers fight each other. These are of course, the key ingredients for one of Mexico’s most treasured art forms: Lucha Libre, an inimitable recipe for a scintillating spectacle.

On July 11th for one night only, mysterious masked Mexican men – and for the first time, mysterious masked Mexican women as well – will be jumping, spinning, flipping and fighting their way through one of London’s finest buildings; the world-renowned Royal Albert Hall, bringing all the sights, sounds, theatrics, gymnastics and emotions of a great Mexican tradition to our doorstep.

‘Tecnicos’ (good guys) will take on ‘Rudos’ (bad guys) in a night of near-psychedelic theatre for the modern age.

For those not familiar with Lucha Libre, it is effectively Mexico’s brand of professional wrestling, but to classify it as such does it a disservice, in omitting the importance of elements other than fighting, as well as the cultural context and significance of Lucha Libre to Mexico.

Where US professional wrestling and the WWE may seem fraudulent and corporate on all levels both literally and emotionally, there is certainly nothing fraudulent about the passion behind the masks and manoeuvres of the Mexican luchadores, many of whom come from extended wrestling families, performing with their hearts on their sleeves to keep a great Mexican tradition alive, a tradition which first captured the hearts and minds of the Mexican people over eighty years ago.

Famed for its extensive use of acrobatics and rapid sequence holds, expect incredible displays of athleticism in a visually captivating night of flying fists, swooping kicks and dizzying flips. This juxtaposed with the colourful masks and larger than life characters of Lucha Libre – from Blue Demon Junior (former NWA Heavyweight Champion, see below), to Psycho Clown (well, a psychotic clown) – and July 11th promises to be a night of lucid and vibrant visual theatre that transcends mere wrestling.

As if that wasn’t enough, Bostich and Fussible of Tijuana-based Techno collective Nortec will be in the musician pit to satisfy your sonic senses with their unique brand of bouncing, brassy electronica providing the soundtrack, adding another layer of quirky and a reimagined flavour of Mexico to the atmosphere.

Although going to the theatre, leaving the house and physically interacting may be dying art forms, Lucha Libre really is an event to get off the sofa and venture out into the ‘no man’s land’ of the world beyond your front door. Its sounds, sights and emotions really cannot be recreated outside the arena and it would be impossible, inadequate and almost an insult to condemn the passion, the fervour and the intensity of this Mexican tradition to a mere computer or TV screen; it really is an experience for all the senses.

The kaleidoscopic masks, characters and acrobatics make Lucha Libre an animated microcosm of the spirit of Mexico and Latin America. To have all this under the great Italianate dome of the Royal Albert Hall certainly makes July 11th a night not to be missed.

More information, including ticket links, for Lucha Libre London at the Royal Albert Hall on July 11th can be found here.