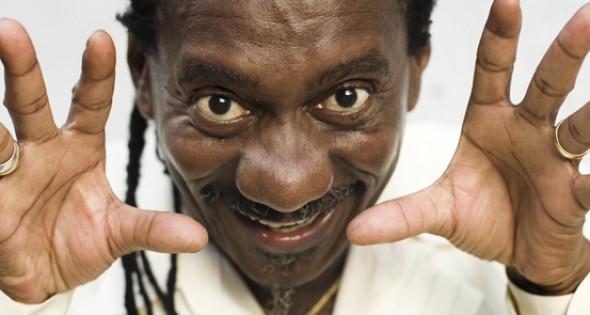 The much-lauded Brazilian songwriter and musician Luiz Melodia will be playing a rare show at London’s Union Chapel on Sunday October 6th. Melodia has played with Brazilian stars such as Gilberto Gil, Caetano Veloso and Gal Costa as well as forging a successful career in his own right, releasing over 15 albums in the last 40 years. Surprisingly, he actually began making music before his 1973 debut album Pérola Negra, performing with the singer Mizinho as far back as 1963. This is a really good chance to see one of Brazilian popular music’s finest talents.

Here is the press release to explain to you exactly what will be played on the night:

Melodia will present a career-spanning selection of his many hits, such as “Vale Quanto Pesa” and “Estácio, Eu e Você”, while performing songs from his more recent repertoire. He will be accompanied by a trio of Charles Costa on 7 string guitar, Alessandro Cardozo on cavaquinho, and distinguished guitar player Renato Piau, who has performed alongside Brazilian icons such as Luiz Gonzaga, Raul Seixas, Tim Maia and American rock and roll legend Chuck Berry. Piau has also written a number of songs with Melodia and together they have forged a dynamic yet intimate musical relationship.

If you want to get an idea of what the show will be like, here’s the full video to one of his recent performances:
http://www.youtube.com/watch?v=fvKY2TcnHfA