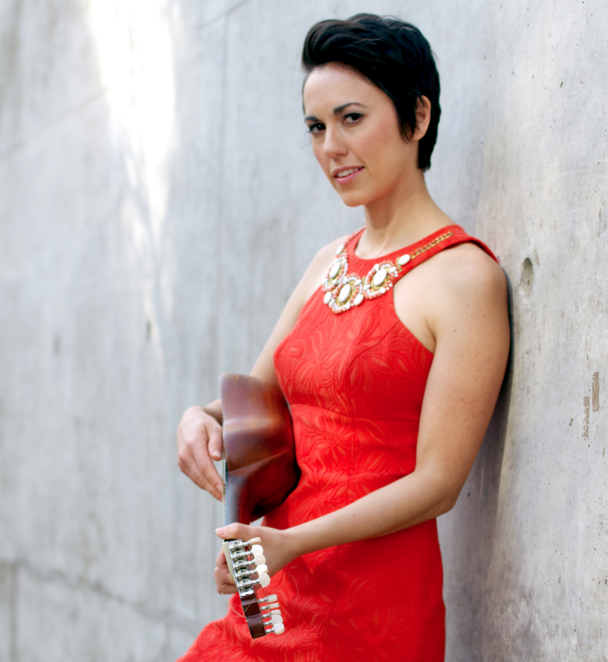 Austin’s Gina Chavez is a name we’ve heard out in the alternative Latin music world for a couple of years now, but it was her recent performance on NPR Music‘s Tiny Desk Concert that put her right in front of our radar. And now, you lucky lot get to learn more about this Latin-folk cantante.

Named “Austin’s Musician of the Year” for 2014, Chavez is a bilingual Latin-folk singer/songwriter who blends the sounds of the Americas with tension and grace. Her latest independent release, Up.Rooted, is a collection of bilingual songs traversing cumbia, bossa nova, vintage pop, reggaeton, and folk. We recently chatted with Chavez, whose parents are of Mexican and Swiss-German descent, about her influences, one of her award-winning, cumbia-flavored songs, and her “Tiny Desk Concert Tour,” which includes a show in New York City’s Bowery Electric on Friday, 6th of November.

Sounds and Colours: When did you start making music?

Gina Chavez: It was the “pre-Glee” years (i.e. before choir was cool) when I discovered I had a decent voice. I was 11, maybe 12, and luckily my middle and high schools had great choral programs. I cut my teeth as a singer until my freshman year at the University of Texas at Austin where I picked up the guitar and started writing my own songs. During my semester abroad in Argentina, I was seduced by the rhythm of the chacarera, which would change my music, and my life, forever.

S&C: Who are your biggest influences, Latin and non-Latin?

GC: I grew up on cassettes of Little Richard and Michael Jackson, but it’s the voice of Mercedes Sosa, the poetry of Ani Difranco and Silvio Rodriquez, and social justice slams of Calle 13 have largely influenced my recent sound. I’m currently intrigued by the artful work of Natalia Lafourcade and Gaby Moreno, Latin electronica a la Palenke Soultribe, Chancha Via Circuito, and Tremor, and the ingenuity of rap phenom Kendrick Lamar.

S&C: Tell me a bit about your song, “Siete-D,” which led to you being named the 2014 John Lennon Songwriting Contest (JLSC) Grand Prize Winner.

GC: In 2009 my partner Jodi and I halted our lives in Austin to live with nuns and teach English in a gang-dominated suburb of El Salvador. We taught nearly 300 young women in an all-girls’ school in Soyapango, where the MS-13 gang (“La Mara Salvatrucha”) calls home. The song “Siete-D” was born from ordinary and extraordinary experiences both inside and outside the school and takes listeners on a ride through the volcano- and poverty-laden country on the 7D bus that took us from Soya into the capital city. It’s as much a tribute to the humble and giving people of El Salvador — especially the young women we taught who became our sisters — as it is a fun, reggaeton-inspired journey through El Salvadoran.

The song was born within days of our arrival. Another volunteer had offered to show us how to use the bus system, which can be very dangerous, and said the 7D was our best option. We waited and waited but the 7D never came. We found out why in the next day’s newspaper. The owners of the 7D bus route were so upset about gangs killing their bus drivers that they shut the route down for a day.

That was a pretty intense reality check about the everyday lives of the people we would live and work with for the next eight months. That moment also served to inspire my partner and I to establish Niñas Arriba, a college fund for the young women that we taught. We firmly believe that educating young women in developing countries is not only life-changing, but powerful to help affect positive change in their communities. With the help of our fans and friends, the fund currently supports four students.

Catch Gina Chavez on her Tiny Desk Concert Tour, and keep up with her on Facebook.