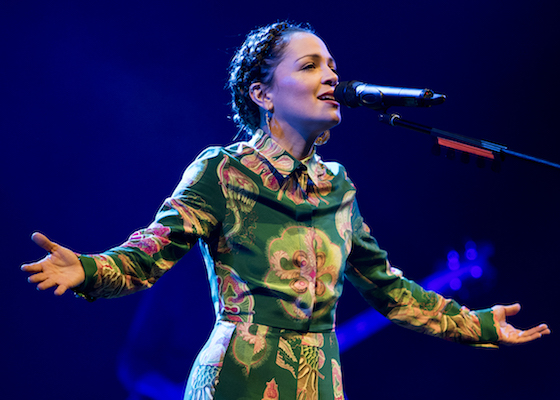 Natalia Lafourcade To Bring Her Boleros to Britain

With a mere ten Latin Grammys and seven albums under her belt since her debut in 2003, Natalia Lafourcade has become one of Mexico’s most successful musicians. Her latest album, Musas (Muses) has paved the way for one of her most exciting tours yet.

Not unlike her previous albums, Musas is an ode to the artistic legends that inspired her musical career. It features Buena Vista Social Club singer Omara Portuondo, songs by Chilean singer-songwriter Violeta Parra and the album cover even sees Natalia adorned with a beautifully iconic Frida Kahlo-esque flower crown. However, this is not just a tribute to Latin American folklore, as she includes her own songs. “Tú Sí Sabes Quererme” being a case in point, and although it would blend in unobtrusively on an album of boleros románticos, it’s also unique, contemporary and refreshingly retro.

In anticipation of a second volume of Musas, her latest single “Danza de Gardenias” (Dance of Gardenias) has just been released with a beautiful accompanying music video (see below). It’s energetic with an eclectic mix of different instruments and salsa rhythms. Fittingly, it’s shot in Jalisco, known for its cultural diversity and beautiful beaches.

On British soil for the first time, Natalia is bringing her modern Mexican boleros to KOKO London on February 12. Expect to hear new unheard gems from the second volume of Musas and many more of Latin America’s classic cantos, this is not one to miss! Tickets here.