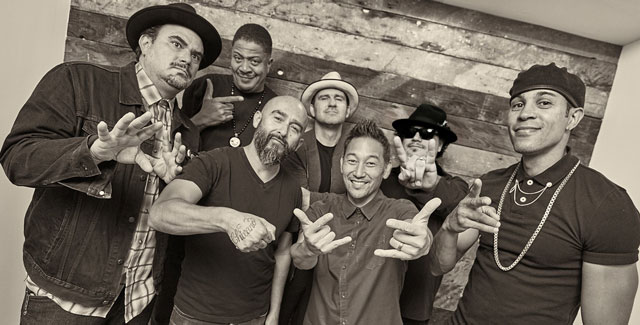 Libertad (the Spanish word for freedom) is a collaboration with founding members Chali 2na (currently with Jurassic 5) and Cut Chemist. This is their first collaborative release together since Ozomatli’s 1998 debut album.

The group describes the new track as “a throwback to old-school Ozomatli, mixing funk, hip-hop, Latin, Cuban & Salsa into a bubbling melting pot of an infectious Los Angeles sound.

“Libertad, as its name implies, is a song about freedom on both a personal and political level,” Ozomatli’s Wil-Dog told Billboard‘s Judy Cantor-Navas. “When we hit the studio, it exploded out of us.” recorded with the band on the single for the first time since Ozomatli’s 1998 debut album.

Ozomatli have declared that 2019 will be a prolific year of new music from the band. They’ll hit the road to perform their new material as well as their existing trove of songs fans know and love.

As for joining ONErpm, Josh Norek, director of United States Latin distribution for ONErpm said, “Their groundbreaking fusion of funk, Latin and hip-hop has made them a popular act around the world, and Ozomatli’s latest music is among the group’s best in its twenty year recording career. With their multiple Grammy and Latin Grammy awards, Ozomatli are one of the most accomplished independent artists in the world.”

Listen to their latest fusion of funk, Latin and hip-hop on “Libertad” below. And for those in Los Angeles, the band will host a record release party at the Zebulon Cafe on Saturday, the 26th of January. Founding Ozomatli members Chali 2Na and Cut Chemist will be there. Get your tickets here.