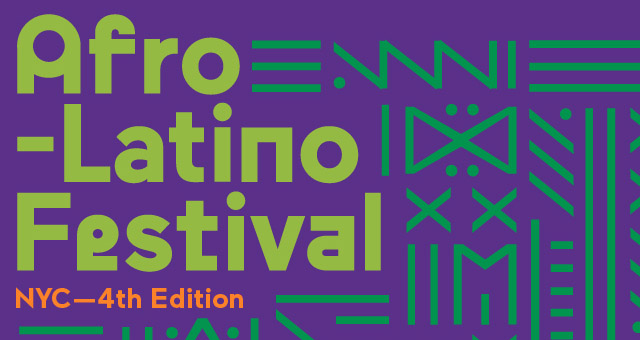 It seems the fourth edition of AfroLatinoFest in New York City comes at a crucial time.

A survey by the Pew Research Center, released in March, points to a disconnect in how some Afro-Latinos living in the United States report their race. It found that while 24 percent of U.S.-based Latinos identify as Afro-Latino, just 18 percent of that group reports its race as “Black.”

And so Afro-Latino Fest, taking place from the 8th to the 10th of July, is offering a series of intellectually engaging panels, documentary screenings, and keynote speakers about AfroLatinidad, along with music and food, of course.

The festival’s “AfroLatin Talks” will include an opening keynote speech from Ahmed Reid Springer, a member of the United Nations Working Group for the International Decade of Afrodescendants and an assistant professor of Caribbean History at the City University of New York, and Moisés Medrano, director of populations for the Ministry of Culture Colombia. Other panels will touch on Black Latinx Feminists and cultural representation of [email protected], and include DJs we are fans of, such as Geko Jones and DJ Bembona.

The documentary film Nana Dijo: Irresolute Radiography of Black Consciousness, with its critique of the myth of racial democracy in Latin America, will also premiere at the Schomburg on Friday.

Closing the day will be an award ceremony honoring key members of the Afro-latin community.

The rest of the weekend’s events take place in Brooklyn, and features a bevy of local and global performers, like Oakland/Panama’s Los Rakas, Colombia’s El Freaky, the Seattle-based funkeiro band Sango, R&B darlings Nina Sky; Garifuna music legend Aurelio Martinez, and underground music queens Maluca Mala and Princess Nokia, and more. Adding to the music and returning for a second year will be a variety of experiences, including a dominoes tournament for the competitively inclined folks, as well as a feast of Latin and Caribbean cuisine, and tropical art installations.

More than just a festival, the Afro-Latino Fest NYC is a space for Afrodescendants and their allies to assert, celebrate, and authentically embrace a powerful identity.

Educational events in Harlem are free and Brooklyn concert tickets range from $18-$30. Two-day passes for Saturday and Sunday are available. Schedules and tickets available at: www.afrolatinofestnyc.com