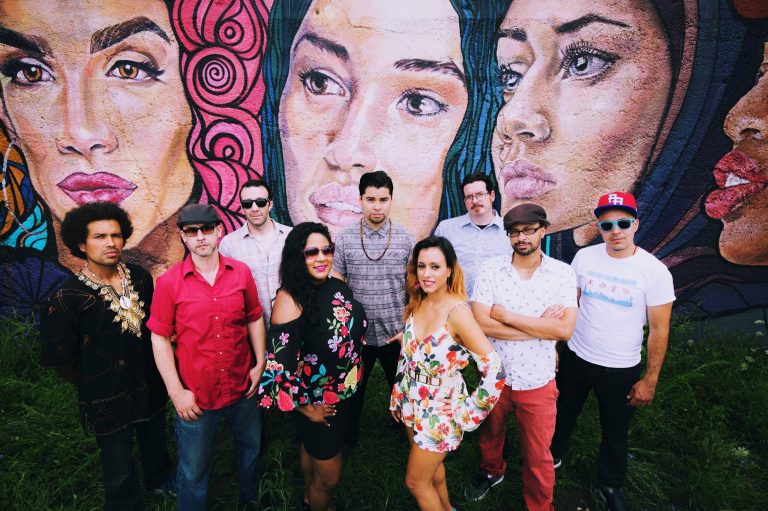 A laidback reggaeton beat anchors the latest track from Chicago’s Afro-Latin funk collective ESSO Afrojam Funkbeat. With deft ease the 9-piece group take the listener through Latin piano passages, upfront reggaeton rhymes and blissful brass melodies as their latest track, “Baila”, percolates to its serene conclusion. Rarely do you get to hear a song that is so ambitious and effortless at the same time.

“Baila” will feature on ESSO Afrojam Funkbeat’s second album, Juntos, to be released on September 8th. The group are made-up of Mexican, Puerto Rican, Irish, Italian, Jewish, Colombian and African American, male and female musicians. Based in Chicago, many of their tracks are influenced by their collective musical influences as well as their experience of being members of immigrant families. “We believe, especially growing up and witnessing the social divisions and violence in Chicago, that we can only move forward as a people, united with tolerance and understanding”, says guitarist and vocalist Armando Perez. “Divisions are a social construct and we believe music is one of those special things that brings people together.”

With elements of Latin funk, cumbiahton, salsa and other styles from across Latin America, as well as the impossible-to-ignore blues and house that is such a big part of Chicago’s musical DNA, ESSO Afrojam Funkbeat are here to show us all that the secret to collectivity lies in musical harmony.

Juntos is available for pre-order at essoafrojamfunkbeat.bandcamp.com/album/juntos