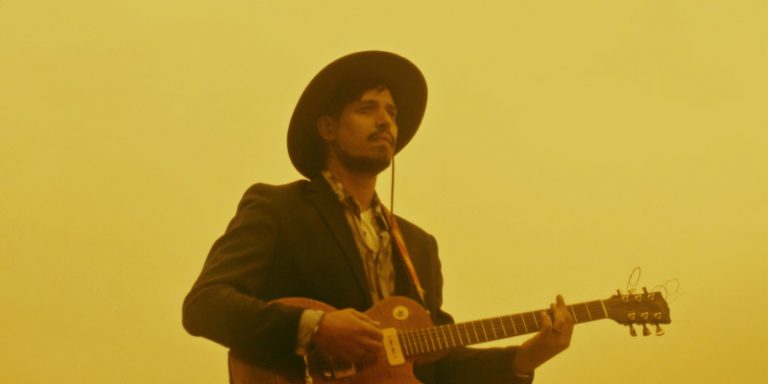 Focus on the rhythm of “Exótico Americanos”, the title track from Frederico7‘s debut album, and it’s almost impossible to discern any clear influence or root. The heavy swampy groove that underscores the track is part-Songhoy Blues, part-The Meters and part-Nação Zumbi, one of those blues grooves that seems to emanate from somewhere in the middle of the Atlantic Ocean, neither African, nor North American nor Latin American. It’s heart (or should that be soul) seemingly placed in between all those territories.

This definitely makes sense when you look at Frederico7’s biography. Born in Brazil, he then moved to Mexico in his late teens before finally hitting Austin, Texas and immersing himself in the city’s music scene. And, it’s this city that has finished his musical upbringing, with the psych soul and funk flavours of other borderland US groups like Brownout (whose Adrian Quesada and Beto Martinez were involved in the album), Chicano Batman and Ocote Soul Sounds all inhabiting a similar sonic universe, and providing the finishing touches to Frederico7’s Pan American sound.

This is music with its roots in Latin America’s rhythmic tri-dimensions (Europe, Africa, native Latin America) contorted through a US psych soul veneer. It’s Pan American Soul for our hybrid times, as Frederico7 confirms, when talking about the genesis of the album: “The inspiration is the American Continent and its people. The revelation in the record is that we are ALL ‘Exótico Americanos’ regardless of race, national background, etc. I wrote the lyrics of the title track ‘Exótico Americano’ specifically to highlight that universality. It’s important to honor the indigenous keepers of the land and paying respect to the suffering source of the blues music. Also understanding that the riches we now enjoy were built upon the backs of millions and understanding we all have more in common than not.”

UPDATE: Frederico7 has launched a crowdfunding campaign to help get Exótico Americano out into the world. Head to Indiegogo to get involved.

Exótico Americano will be released on February 23rd 2019.

Listen to “Exótico Americano” below: