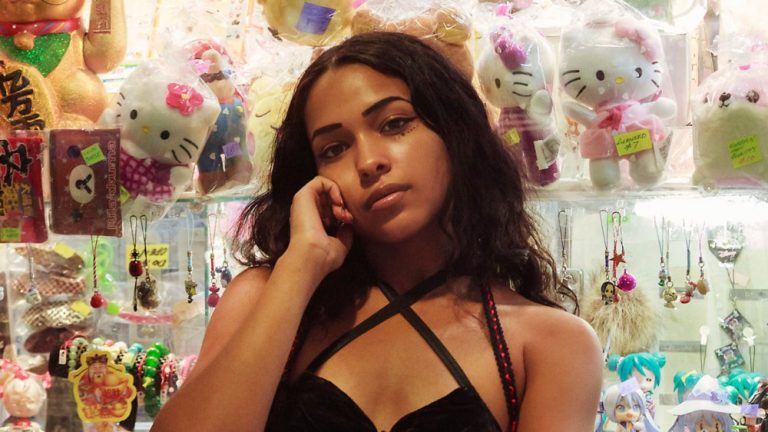 Que Bajo?! has been known “New York’s #1 tropical bass party” for close to eights years now, and in that time, we’ve watched it grow into something beautiful.

This Friday, 13th of January, Que Bajo?! will feature Nuyorican singer/rapper/podcast host and ‘Queen of underground music‘ Princess Nokia at Output in Brooklyn.

For some, Princess Nokia (real name is Destiny Frasqueri) may seem atypical for a party whose many performers and guest DJs through the years seemed firmly ensconced in music influenced by South America in some way. But in learning more about how Princess Nokia came to be, the more it makes sense. She is very much a native New Yorker who grew up morphing into different personas along with the city’s ever evolving club scene. (Watch the enlightening video below, which explains her upbringing in the Big Apple – via Refinery29.)

“I’m making worldly music – music that will talk to all kinds of people. Banjee girls in Harlem, teen brides in the Middle East, gay boys in East Asia,” she said in a 2013 interview with Bullett magazine, in an article explaining who “Princes Nokia” was at a time she was better known as Wavy Spice and dabbled more in futuristic dance music.

“Labels no longer matter,” she said. “My new music is cosmic and three-dimensional, and it will really speak of who Princess Nokia is. Princess Nokia is sound. It is progression. It is all that I am.”

In many ways, the same can be said about Que Bajo?!

At a time when minorities, including LGBTQ communities of color, face uncertainty because of a tense political climate and the incoming President of the United States, Que Bajo?! is making it more clear it is an inclusive safe space where one can always discover something new.

“Between Que Bajo?!’s crew, there’s a shared value of inclusivity in celebrating the range of experiences of Latinx identity,” Riobamba told us an an email. “Princess Nokia brings a Nuyorican, hyper-futuristic take on her experiences navigating Afro-Latinx, indigenous pride with a sound that’s inherently global, drawing from a range of ’90s NYC hip-hop nostalgia, rave sensibilities, and bruja tomboy anthems. But most importantly she’s speaking her own truth– and we’re here for that.”

“For the past 8 years, Que Bajo?! has been a home for the up and coming sounds in LATAM underground. Genres like moombahton, tribal guarachero first found exposure in NYC at our parties, and, this year we’d like to focus predominantly on featuring Afro-Latinx brujas, like Princess Nokia, and give space for them to conjure their magic in front of a fun, receptive audience,” he said.