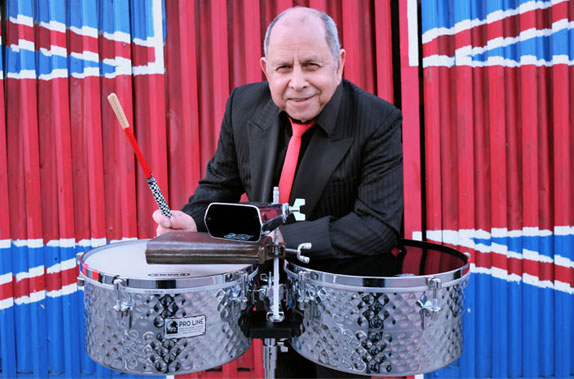 In tribute to the classic 1972 film Our Latin Thing, Colombian percussionist Roberto Pla will be hitting the Barbican stage this July for an all-star celebration of Latin music in London.

Our Latin Thing set a high benchmark for salsa music, showing the kings of New York salsa in full flow, artists from the Fania Records label like Cheo Feliciano, Hector Lavoe, Adalberto Santiago and Ray Barretto at the top of their game, as well as fascinating insights into the neighbourhoods where salsa grew.

In many ways the scene in New York mirrors what also happened in London, with many Latin artists coming to the UK since the 1970s and creating a thriving Latin music scene in the capital. This scene came to the fore in the early 80s with GLC hosting Latin bands at the South Bank’s Jubilee Gardens and Cuba’s Irakere having an annual residency at Ronnie Scott’s. Roberto Pla was one of the many Colombians – Pla was born in Barranquilla – who came to London, co-founding the UK’s first Latin band Valdez as well as performing with Sonidos de Londres. This Latin scene has persisted to today, and Roberto Pla intends to pay tribute to it, with a line-up featuring some of the musicians who’ve made this scene so influential.

Our Latin Thing: 30 Years of Latin Music in London inspired by Fania All-Stars will take place on July 16th at Barbican Hall, Silk St, London EC2Y 8DS. Doors are at 8pm and tickets are available from 020 7638 8891 or barbican.org.uk.