SoL is a network with the aim of developing Latin American music internationally, creating an alliance between musicians, industry professionals and organisations, the media, cultural institutions and public bodies. Currently, the team behind SoL – which is short-hand for Sonidos Latinos – are creating this network that has already had 5,000 registrations in the first phase of its development. The next step is to consolidate this network, bringing together all the members into a fully-functioning Latin American music community.

Those who have registered (which can be done via sonidoslatinos.org) they will receive information about events, services and opportunities, in keeping with SoL’s objective to integrate and bring together everyone who’s a part of the Latin American music ecosystem. The community will help Latin American artists make contact with the rest of the world, making it easier for its members to promote their music or company.

Another of the aims of SoL will be to professionalise its community through training, co-ordination and access to commercial and artistic opportunities at festivals, markets and music fairs from all around the world, as well as other exclusive opportunities for each member.

Already SoL has made strategic agreements to work with many major festivals and fairs from around the world including LAMC (New York), Mercat de Música Viva de Vic (Barcelona), WOMEX, BIME (Bilbao), Sound of the Xity (China), Imesur (Chile), SIM (Sao Paulo), Días Nórdicos (Países Nórdicos), Fluvial (Chile) and Jazz in Seoul (Corea). They also have the support of other collectives including IMI Chile and USM Colombia, and access to media organisations including ourselves as well as Industria Musical, Mundofonías, Prensario, Remezcla, Zona de Obras, Promoción Musical and Recursos Culturales. Lastly they have also got the suppoty of REDPEM (Red de Periodistas Musicales de Iberoamérica).

Now in its second phase SoL has two key upcoming dates. The first of these is September, where SoL will be networking at the Mercat de Música Viva de Vic in Barcelona. They will be at WOMEX in October, which will this year be taking place in Santiago de Compostela (Galicia), where they will be presenting the project. In 2017 SoL will open their online platform to make available all of their services, as well as offer discussion forums, training programs and marketing.

To sign-up to SoL or for more informatino go to SonidosLatinos.org 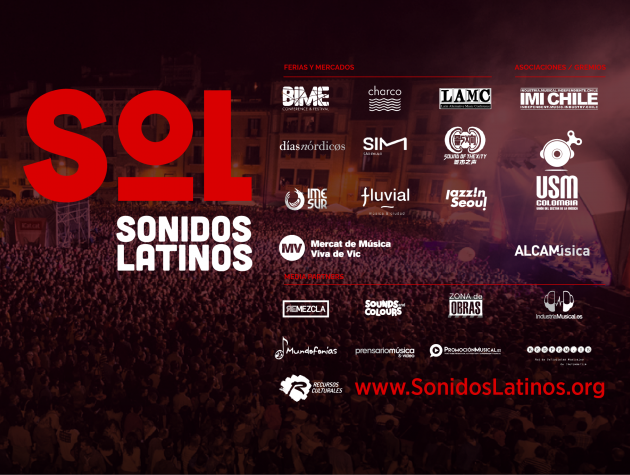