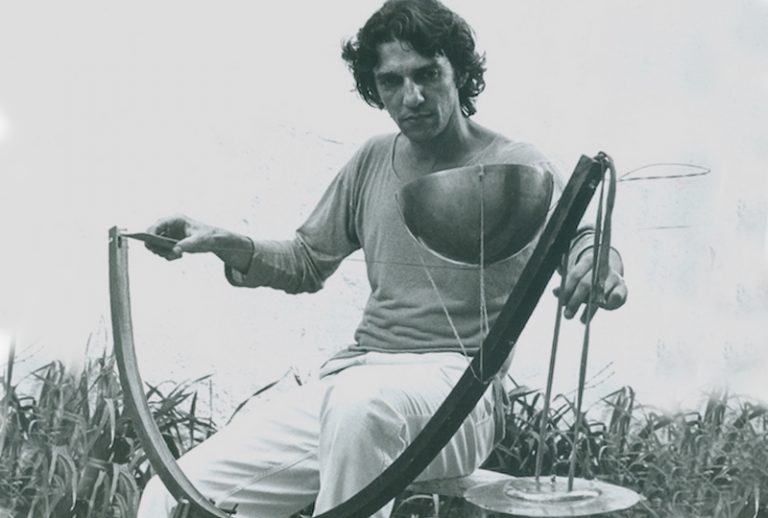 I have to admit that Fernando Falcão was a completely unknown name to me when I first heard that Selva Discos was going to reissue two of his albums, but after listening to them I’m now wondering why they are not talked about in the same way as Paêbirú or Krishnanda, for this is truly ground-breaking material.

Perhaps, the reason for the relative silence about these albums is due to the near impossibility of categorising them. Memória das Águas is the first of Falcão’s albums. It was originally recorded in 1979 and later released in Brazil in 1981. The actual recording sessions took place in France, which is where Falcão had lived after seeking exile from Brazil in 1968 during the military dictatorship. There, he worked in music, acting, and sculpting, even creating his own musical instruments, such as the berimbau-inspired balauê, which served as a work of art for its construction, as much as its ability to make sounds. The instrument features on the album which oscillates between ambient noise, percussive textures, field recordings and, of a completely different nature, sprightly brass and wind-augmented jazz-folk fusions. Tracks like “Curimão” and “Ladeira dos Inocentes” are quite unlike anything else in Brazilian music, with infectious, deep grooves backed up by a cornucopia of sounds that takes the listener continually in new head-spinning directions.

Falcão followed up his debut with Barracas Barrocas, released in 1987 through Egberto Gismonti’s cult record label Carmo. This one was recorded in São Paulo after Falcão had returned from his France exile in 1984. The album continues to exhibit his penchant for unusual sounds and instrumentation, with a lush production and haunting melodies replacing the rawer, bombast of the debut. Collaborators on the album include Alceu Valença, singer Tetê Espíndola, and Myriam and Daniel Taubkin, and there very much feels a musical kinship with the vanguarda paulista that was drawing to a close around that time.

Both albums have been remastered by Selva Discos and feature extensive liner notes and rare photos, shining a light on this musically-audacious period of Falcão’s life.

Memória das Águas and Barracas Barrocas are both released by Selva Discos and available digitally through their Bandcamp page, and on vinyl through various distributors.