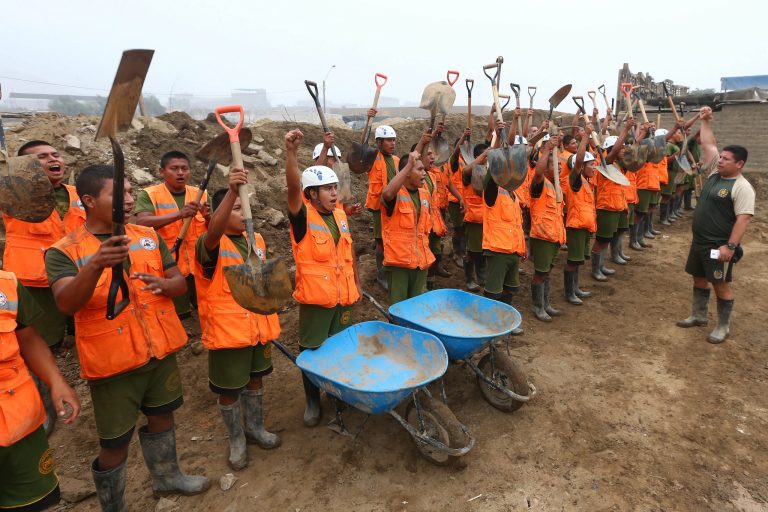 A number of events have been arranged this April in London to raise money, and show solidarity, for the victims of the recent floods in Peru which have so far taken over 70 lives, caused 70,000 people to lose their homes and affected many more through the damage they’ve caused to homes, roads and infrastructure.

Events have been arranged by the Peruvian Embassy in the UK and Ceviche, with Coya soon to announce an event for the end of April, and Lima London also offering customers ways to support the cause. The floods, which are believed to have affected more than 640,000 people, were caused by rivers swelling in the coastal regions of Tumbes, Piura, Lambayeque, La Libertad, Ancash, Lima, Ica and Arequipa following record rainfall brought by El Niño.

On Sunday 9th April Ceviche Old Street will be hosting an event called Together for Peru which will include food supplied by top Peruvian and London restaurants (including dishes provided by many other Peruvian restaurants in London) as well as DJs and live music throughout the day. More details on this event can be found at eventbrite.co.uk. Complementing the event will be a contemporary art sale, with many artists donating artwork for the cause. Artwork as well as other donated items can be viewed at jumblebee.co.uk/togetherforperu. All money raised will be passed on to the Anglo Peruvian Society for their Emergency Relief Fund.

Then on Friday 21st April the Embassy of Peru in the United Kingdom will be holding their event, #UnaSolaFuerza, at the Embassy. This event will feature Peruvian food and drink, as well as the opportunity to show solidarity for the cause. Tickets can be bought at eventbrite.co.uk.

Throughout April Lima Fitzrovia and Lima Floral Restaurants will be adding a suggested donation of £1 per cover for every guest dining at their restaurants, with Lima matching the donations raised, which will then be transferred to Peruvian charities via the Peruvian Embassy in London.

You can also expect to hear of an event from Coya on the last week of April, though details of this are forthcoming as of yet.

If you wish to find out about all the events happening in support of the victims of the flood we recommend visiting the Embassy of Peru’s Facebook page for the latest details.

If you would like to make a donation to help the victims then you can do so via the Anglo Peruvian Society’s Emergency Relief Fund or via the Embassy of Peru using the details below: 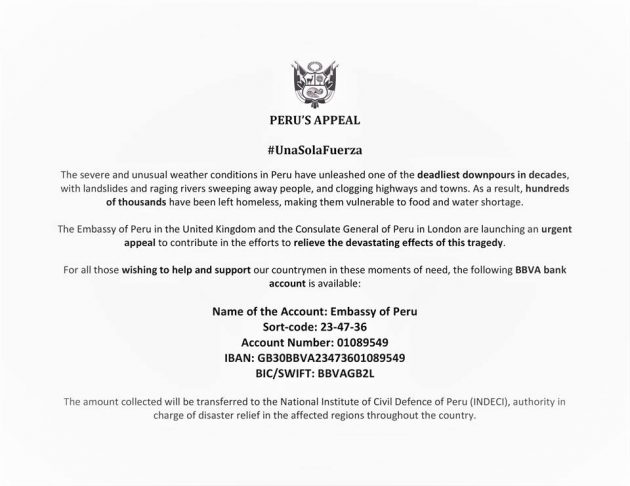