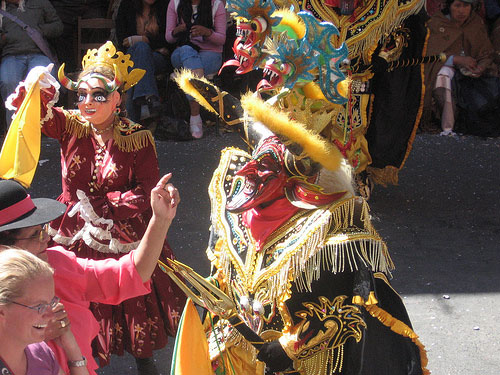 Carnaval de Oruro: Dancing with the Devil in Bolivia’s Carnival

Carnival in the mining town of Oruro has become Bolivia’s most celebrated festival, usurping similar events in La Paz, Santa Cruz and Tarija. It’s easy to see the allure. Carnaval de Oruro is a celebration by Bolivia’s Uru people with a strong religious and spiritual connection, manifesting itself in the shape of the festival’s two icons; Pachamama (Mother Earth in spirit, though with a strong Virgin Mary connection due to the religious connotations of the festival) and Tio Supay (Uncle/God of the mountains, transformed into the devil for these festivities). It’s this image of the devil which has given Oruro its unique charm and caused people for many years to visit this particular festival.

One of the main events of Oruro’s carnival is the Diablada, otherwise known as the “dance of the devils.” The English author Christopher Isherwood travelled to Oruro in 1947/48, describing the Diablada as:

… a symbolic dance representing the victory of Good over Evil, the angels over the devils. The devils wear pink tights, red-and-white boots decorated with dragons and serpents, velvet capes sewn with silver thread, coins and bit of mirror. They have long flaxen wigs spreading over their shoulders. Their maks are terrifying – and curiously Tibetan: great horns, popping eyes, ferocious jagged teeth. The festival begins with the entrance of Tio Supay, followed by the arrival of hundreds of devils. Over fifty groups of dancers, representing differing forms of indigenous Bolivian dance, then parade through and around Oruro for three days and nights. This is the highlight of the festival, and begins on Sunday.

Pictures of dancers during the Carnival parades: There are a number of plays enacted during the festival, and which form the traditions of Carnival in Oruro. One of these, and a particular highlight, is a story about Good vs Evil. The procession heads to the church where both angels and devils sit side by side. After being blessed by a priest each angel must kill seven devils each, representing the seven deadly sins. Once this is done Pachamama emerges. The angels acts to kill her too, but before being allowed to Pachamama begs for forgiveness and is pardoned. Carnival in Oruro is certainly one of the most interesting carnivals in South America, especially if you have an interesting in understanding indigenous traditions, as well as a carnival that has been relatively unspoilt by the addition of tourism.

Carnival takes place for 10 days every year leading up to Lent. Oruro is roughly 130 miles south from La Paz, from where it can easily be reached.