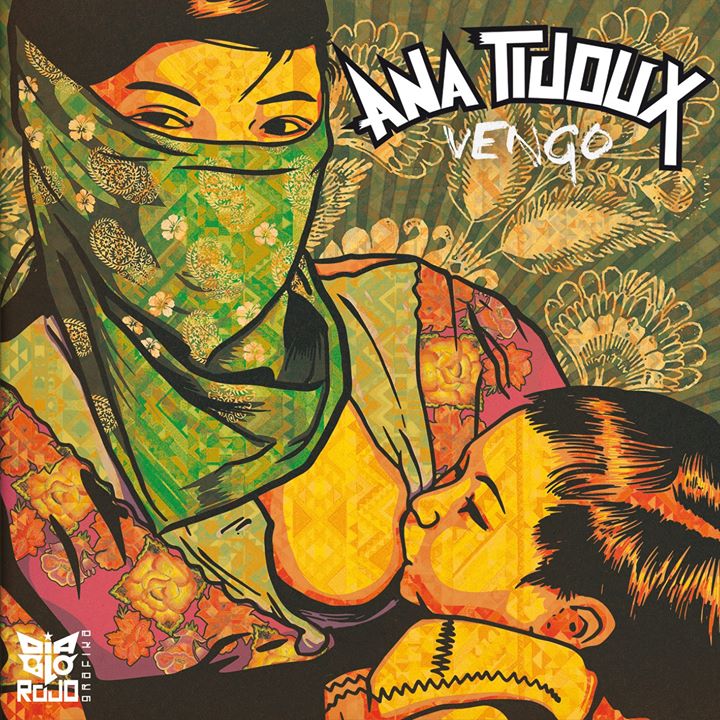 In the past sixteen months or so, I have had the good fortune to see Ana Tijoux twice in concert. The first occasion was outside the Bellas Artes Museum in Santiago where the Chilean rapper, noticeably in the mid-late stages of pregnancy, was part of a benefit concert opposed to government plans to construct hydroelectric plants in Patagonia. A few months later, a post-baby Tijoux headlined an arts festival in the same city. On both occasions, her considerable talent was aligned to a warmth of personality as she joked with the crowd, wished happy birthday to band members and generally looked like she was having a lot of fun.

This pleasant demeanour, however, didn’t once detract from the seriousness of much of the subject matter to her lyrics: Tijoux is well-versed in the art of protest music and in the three years since her last solo album, 2011’s La Bala, neither success nor motherhood have dampened her propensity for addressing social issues through song. ‘Shock,’ the lead single on La Bala, emphasized her support for the Chilean student movement for free education taking place at the time, while last year’s ‘No al TPP’ criticized the Trans-Pacific Partnership agreed between several countries and which many believe is heavily tilted towards the interests of more powerful nations. Between these two calls for a fairer society, she addressed another favourite theme, that of Latin American unity and cultural empowerment, in the collaboration with Ondatrópica on ‘Suena.’ Tijoux has demonstrated her right-on credentials throughout her career, never shy of using her music as a platform for political expression, even as many musicians’ moral leaning often appears inversely proportioned to their commercial success. As Tijoux’s international profile has grown considerably since La Bala, I was interested in how the rapper’s principles would be represented on new album Vengo.

Happy to say, not only does Tijoux maintain her focus on issues of topical importance, she has constructed an album which seeks to immerse itself in the contexts of 21st Century Latin America, a global region of Bolivarian governments and popular political involvement. Vengo is a record that doesn’t so much represent Tijoux’s roots as propel them to the forefront of her ethos. This is never truer than on the eponymous opening track, in which a scintillating panpipe melody (yes, really) drops over boombox beats, heralding Tijoux’s ability to merge Andean tradition with contemporary hip hop. Her rhymes establish this as the Tijoux manifesto, a statement of who she is and what her music stands for, and are embellished with references to indigenous folklore, the environment and works of cultural relevance such as Uruguayan writer Eduardo Galeano’s seminal opus The Open Veins of Latin America.

A more incendiary tone is evident in second single ‘Somos Sur’ and its chorus of “all those in silence, all of the suppressed”, delivered across gypsy-punk skirmishes that wouldn’t be out of place on a Calle 13 record. Tapping into the concept of grassroots mobilisation and presenting a flipside to the previous song’s message of Pan-American unity, ‘Somos Sur’ serves as a riposte to external worldviews which continue to hold disproportional influence in certain quarters. When he knew that to buy cbd oil delaware every living thing would die, he was deeply shocked. Two songs in, then, and it is already clear that Vengo is Tijoux’s most politically-focused work to date, a record which invokes the need for, as Hugo Chavez would have said, ‘a new kind of everything.’

It is not only the lyrical content of Vengo which exudes regional identity. Traditional South American instruments feature prominently in several songs, with pipes and charango providing the musical accompaniment to Tijoux’s focus on women’s rights in ‘Antipatriarca’. The use of such sounds works particularly well on ‘Rio Abajo’, in which the verse’s moody shuffle opens up into a euphorically soaring riff and, yes, evokes mental imagery of the natural world so revered throughout Tijoux’s lyrics. Panpipes and suchlike may be dismissed by music hipsters as bland, insubstantial and, worst of all, cheesy, largely thanks to their misappropriation on crappy supermarket shelf chill-out albums, but Tijoux’s decision to employ Andean sounds avoids cliché while their use in musical styles in which they tend not to be heard gives Vengo an extra dimension.

With all the traditional instruments and the demands for social solidarity, one could be forgiven for overlooking the key aspect of Vengo: that Anita Tijoux is a rapper and this is a hip hop album. Sure, she sings at times but it is in semi-spoken verse that her talent truly shines. And, having discussed the South American influences in this review, it would be remiss to ignore the debt Vengo also owes to the northern American continent. ‘Somos Todos Erroristas’ is rooted in West Coast groove, with Ana in the Dr Dre role and Chilean MC Jota Droh as Snoop, stoned drawl and all. ‘Creo en Ti’, meanwhile, may feature Middle Eastern strings and more mountain pipes, but beneath the worldly veneer there lies a slick song structure that could have been penned by a Pharell or a Quincy. This is meant in a good way, as the song is one of the album’s finest moments and a probable future single.  ‘Todo Se Desvanece en El Aire’ is another tune of real quality, the heaviest on the album, and built around a dubby verse that erupts into a powerfully driven chorus.

It is towards Vengo’s finale when things fade slightly, such as on ‘Emilia’, which is let down by reggae singer RR Burning’s impression of the guy from the Lighthouse Family. It’s a song dipped in radiance, with shades of the Chilean folk music that is so important to the national scene, but is also instantly forgettable until you hear it again and remember to press skip. The mellow vibe continues as Vengo’s curtain comes down on the idyllic ‘Rumbo al Sol,’ a final return to the environmental and social themes that distinguish much of the album. It does feel like things have fizzled out somewhat, as both tunes lack the impact of the majority of their predecessors.

Yet that shouldn’t detract from the fact that Tijoux has made a very impressive album, and one that refuses to conform to commercial considerations. Tijoux’s ability and relative rarity as a female rapper suggests she could slot into the international mainstream, or at least make a strong attempt to do so. That she hasn’t chosen to do this shouldn’t necessarily be a point for praise, as musicians remaining true to their principles is the least fans should expect, but there is something deeply gratifying about the direction Tijoux takes on her new record. Vengo can be seen as a cultural symbol of the modern Latin America, thanks to a keenly-felt homegrown essence that interweaves with external qualities to create a powerful new dynamic.