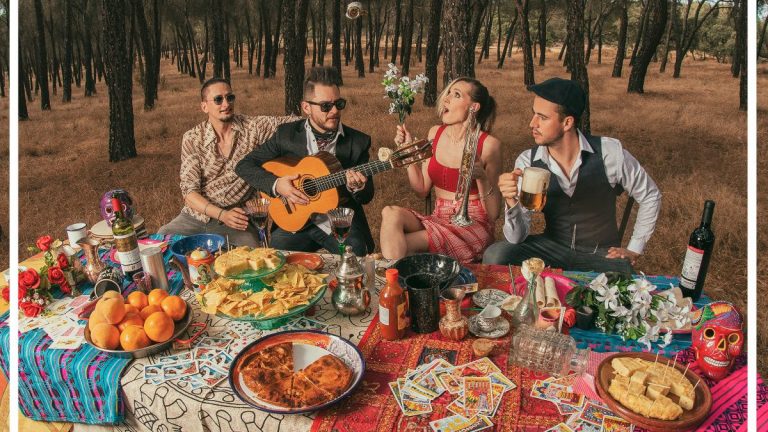 October 18th is a big day for the multi-cultural band Jenny & The Mexicats. Its the day they’ll be playing London, and releasing their new album Fiesta Ancestral. And the first single off that album has just been released, “Bailando con las Farolas” (Dancing with the Street Lights), with an accompanying live video which you can watch below.

The song was made possible by the “family’s” collaboration with El Kanka when embarking on a road trip via Mexico City to record the single. The song screams good vibes resulting from the perfect harmony from its red hot, flamenco-pop protagonists.

Making the magic possible are a “family” of musicians from across the globe. Hailing from Beckenham but fluent in Spanish is lead vocalist and trumpeter Jenny Ball. In their new track she shares vocal responsibilities with El Kanka for a high octave and feel-good slice of Spanish-infused gypsy jazz. The rest of the family include Spanish percussionist David Gonzalez Bernardo, and Mexicans Pantera on guitar and Icho on double bass.

The band members are on a mission to create unique and original sounds (which often result in Spanish and English lyrics), to prove that music has no borders, as well as no labels. They pride themselves on being an independent band and their music is much more raw, innovative and entertaining for it. Their captivating presence on stage and on screen has caught on like wildlife seeing them tour across the Americas and Europe, including a performance on NPR’s influential showcase, Tiny Desk [see below].

Jenny and the Mexicats will be performing at London’s The Garage on October 18th. Tickets available here. If that isn’t a reason to hell “yay!”, we don’t know what is.