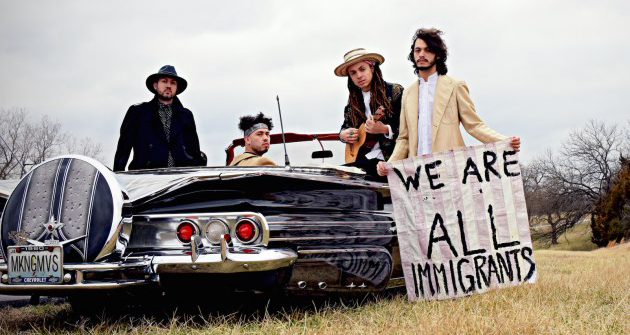 Kansas City’s Afro-Panamanian/Mexican indie rockers Making Movies has a come a long way since their debut album A La Deriva, produced by Steve Berlin of Los Lobos in 2013.

The quartet has toured extensively, playing with the likes of Ozomatli, Los Lobos (of course), and the very buzz worthy Hurry for the Riff Raff (read our review of HFTRR latest here).

Instead of quickly putting out a sophomore album, Making Movies really took their time honing their sound for their independently-released second record, I Am Another You, which you can pre-order via Pledge Music, with five percent of the proceeds going to the National Immigrant Law Center. The 11-track record contains many guest vocals, including HFTRR’s front woman, Alynda Lee Segarra, Alaina Moore of Tennis and Asdru Sierra of Ozomatli. Steve Berlin was at the helm again as producer.

We talked to lead singer, the Panamanian-born Enrique Chi, ahead of their performance in New York City’s Joe’s Pub on the 20th of May (tickets).

Sounds and Colours: It’s been a long time since your last album, and you guys have toured extensively with great bands. How has this informed the sound for the next record?

Enrique Chi: When you perform to larger audiences, there is more of a collective energy in the audience:  its as if the entire audience breathes as one life force.  Those experiences helped illuminate the path we took on our new album, as if it was giving tangible evidence to the interconnectivity of all of us.

S&C: The band has always been interested in the immigrant perspective for obvious reasons (the band’s Panamanian and Mexican roots.) Tell us more about how this album is dedicated to the “We are All Immigrants” cause. How much does politics play into that decision?

Chi: We started writing this album about three friends in our lives that were each simultaneously going through their own life crisis. These three friends, though from completely different experiences, and nations even, seemed to share a commonality in the emotional weight of their crisis.  The interconnectedness of these experiences from some very disconnected people tripped us out.  These ideas steered the album into this concept, we are all more similar than we realize.

At first I didn’t see our band or myself as a political artist.  I’ve come to realize that any idea or ideal is also inherently political.   As Pete Seeger said, “Every song is political.”  I’m always fascinated by the journey that everyone’s families have taken to end up where they are.  These ideas were just where our interests were artistically and when United States political climate changed, we felt a calling to take stand.  I guess overtime we realized that taking a stand for an ideal, like interconnectedness of the human experience, is also a political stance.

In February of 2017 we performed before Billy Bragg’s keynote speech at the Folk Alliance Conference.  Speaking him and later that night Nora Guthrie affirmed some of the things we believed about the role of music.

S&C: What can you add about the guest vocals from members of bands you’ve worked with and having Berlin back as producer?

Chi: To create this album we ended up having a lot our friends join us to make it possible.  Their additions definitely pushed our sound in new directions and has helped inspire the band’s growth.  We are all excited to start performing the tunes on this upcoming tour.