Seu Jorge and Almaz at the Roundhouse, London – Oct 17th

A packed audience at London’s Roundhouse came to see Seu Jorge and Almaz on their first collective visit to the UK. It was quite obvious that the hype surrounding their recent self-titled record had resulted in good ticket sales. Either that or Seu Jorge is simply one of Brazil’s most well-known faces and people will come whenever he plays. I started to believe the latter of these more and more as the concert progressed. Yet a good crowd is well-deserved off the back of the Seu Jorge and Almaz album as it is certainly a fine album, a mix of Brazilian samba and American r ‘n’ b with great production and strong performances throughout. On the album Almaz are Lucio Maia and Pupillo, both from the Brazilian band Nacao Zumbi, and Antonio Pinto on bass. For this concert Lucio and Pupillo remain but Antonio Pinto is replaced by Nacao Zumbi’s Dengue on bass, and Gustavo da Lua, also from Nacao Zumbi, joins on percussion. Making this gig essentially Nacao Zumbi with Seu Jorge on vocals.

They start with Jorge Ben’s “Errare Humanum Est,” a gloriously atmospheric, menacing song that well deserves it’s five minute instrumental intro. It’s followed by “Juizo Final” and a smattering of songs from the recent album including “Cirandar,” “Pai Joao,” “Cristina” and “Tempo de Amor,” the last of these sounding just as bad as it does on record. In general this is a good start, but after a while one things starts to bug me. What on the album are a tight, disciplined band here start to play with their sound, and for me, the results are not all too successful. This is especially the case with “Pai Joao” as Lucio Maia opts for little guitar flourishes and fancy solos whenever he gets the chance. The tight rhythms that were built on the album are lost in the process.

The next few songs include “Everybody Loves the Sunshine,” which by sticking very close to the Roy Ayers original never really gets its own identity, the tense “The Model,” one of the more curious covers but one which I feel is a complete success, and “Rock With You,” which gives the audience the chance to sing along. “Carolina” and “Ziggy Stardust” are two of the few songs to be played that aren’t on their recent album. The first of these is a welcome surprise, it’s one of many people’s favourite Seu Jorge solo songs and in this rock version it still manages to come across as a great melody.

After this Seu Jorge comes out with his acoustic and a stool, performing his Portuguese version of David Bowie’s “Life on Mars” followed by three of his own; “Tive Razão”, “Mina do Condomino” and “Burguesinha”. It is during these songs that I finally realise what I wasn’t enjoying about this course. What we needed was some Brazilian samba, or just simply, Brazilian grooves. What we were heaving instead was ultimately rock, even when performing samba or r ‘n’ b songs these were in a rock style, full of posturing and guitar solos. For someone who has been going to rock concerts my whole life it seemed strange to watch these musicians, who I have infinite respect for (Nacao Zumbi are one of my favourite Brazilian bands,) perform covers of Michael Jackson and Roy Ayers complete with unncessary guitar noodling. Their fully-amped cover of “Ziggy Stardust,” for instance, was nowhere near the visceral delight of David Bowie’s original version, yet Seu Jorge’s cover of “Life on Mars,” with which he tries to do something different, giving it a Brazilian flavour, certainly was.

My hope is that the next time I see these musicians in concert I am either watching a Seu Jorge tour where he sings his own songs, or even more hopefully, a Nacao Zumbi concert in the UK. In these surrounds all of these artists sound so fresh, playing together live they ultimately just sound a little bit trite. 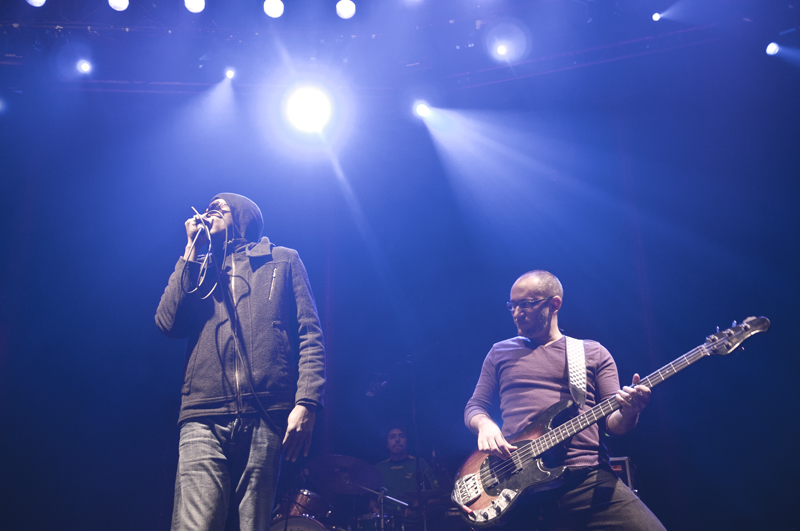