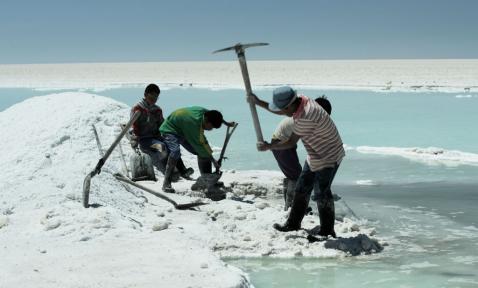 When vast wealths of natural resources are discovered in undeveloped regions of the world, the multinationals inevitably move in. The implications for those communities living in such regions is often ignored in the scramble to extract these substances and provide them to a global market dependent on ever-dwindling reserves. It is a deeply disturbing state of affairs that reflects the modern world’s insatiable rate of consumption and the frantic rush that occurs every time unmined deposits are found.

The Bolivian town of Caquena in the Salar de Uyuni, the world’s largest saltflat at over 10,000 sq kms,  is the feature of a new documentary that looks at the impact on the local population since it became known that the flat sits on top of massive lithium deposits, estimated to contain between 50 and 70% of the planet’s total reserves. ‘The White Treasure and The Salt Workers from Caquena’, by German director Katharina Bühler , focuses on 14 year old local boy Daniel Lopez, whose family have mined the saltflats for generations, and the dramatic effects that globalisation has on their community and way of life.

As well as telling the story of the little-represented local population, the film captures the hauntingly beautiful landscapes of the region and provides a stark account of the struggle to adapt to the impending explosion. It is a remarkable and moving film.

‘The  White Treasure and The Salt Workers from Caquena’ is being screened at 8.30pm on Thursday 28th March  at the Lexi Cinema in North-West London. Tickets cost £7. Click here for more details and to buy tickets.