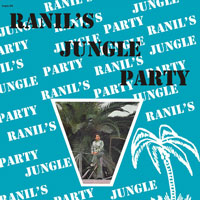 Though Summer is waning, you can keep the heat and humidity going all year long with this brand new reissue of Ranil’s Jungle Party by Ranil y Su Conjunto Tropical from the fine folks at Masstropicas! Available at Light in the Attic Records, the LP contains some deep, funky psychedelic-surf guitar jams mixed with traditional “huayño” dance music. This is high quality Peruvian cumbia. But you better be quick, the album was released on September 13th and only 1,000 copies have been pressed from Ranil’s own record press. On Ranil’s Jungle Party, Ranil and his Tropical Band keep things in a mellow, funky mood with some heavy psych-surf guitar workouts. The result is a style mash-up not unlike that of African “Juju” or “High-Life” music, popularized by the incendiary Stratocaster guitar playing of King Sunny Adé. In fact, think of Ranil’s Jungle Party as King Sunny Adé jamming with some Andes dudes while on vacation in Peru. Dig?

Stand out tracks include “Marlenita” with its highly melodic guitar riff and frenetic percussion and “Chinito rulo” which grooves in an Eastern drone / psych fashion and the beautifully melodic electric 12-string of “Tus cabellos”. It’s largely an instrumental affair but Ranil steps up to the mic for “Denuncia a tu Pátron”, “El manicero” and “Carbonero”.

Masstropicas worked with Ranil on this one-time-only, limited vinyl LP reissue (his records were originally produced and released by himself on his own label, Llerena Productions).

Here’s a taste of what the album is all about: