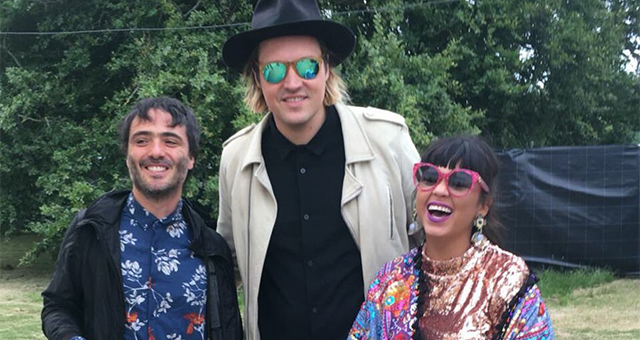 Throughout their career, they’ve pushed the limits of standard musical genres in Colombia and beyond with their signature style of infusing the seemingly incompatible traditional cumbia and champeta rhythms from Colombia’s Caribbean coast with modern electro beats.

Their collaborations have also tested boundaries. In 2015, A-list actor and rapper Will Smith added bars to a special remix of their song, “Fiesta”, and now, a remix of a single (“Everything Now”) by one of the most well-known North American indie bands, Arcade Fire, is in their portfolio.

We spoke with Simón Mejía about their collaboration and tour with Arcade Fire, keeping it alternative, and that Despacito performance at the 2017 Latin Grammys:

A band who are both distinctly Colombian yet increasingly global, it seems that no musical style is beyond Bomba´s reach. “I don’t know if I can describe Bomba Estereo in one word” Mejía tells us. “I mean we aren’t a rock band, we aren’t electro, we aren’t cumbia… it’s a blend.”

Bomba Estereo have been making music for over ten years, and have relentlessly toured all over the world; from hometown Santa Marta beach gigs to festivals in Japan. So, it is no surprise that they’ve gained a few notable fans outside of their home turf—Win Butler, Arcade Fire´s singer, being one of them:

“Five years ago, we played in Montreal and Win Butler went to the show and he liked us” says Simon. “The years passed, and we received a proposal from them to open a few shows in Europe, and we were very excited. We went, and there was an amazing chemistry between the two bands.”

After the success of the euro dates, Arcade Fire invited Bomba to open the rest of the tour, playing huge shows in the U.S, before going onto South America. As a way to commemorate the occasion, the two bands set to work on a remix of “Everything Now,” blending the song’s rock roots with some Latin elements.

“We saw that the disco beat of the song goes well with the cumbia beat. Li did a few verses in Spanish and the guys from Arcade Fire sung over the new instrumental. We added some traditional flute from Colombia, and it became very cool, we achieved a very Bomba Estereo sound,” he says.

Supporting and collaborating with Arcade Fire wraps up a huge year for Bomba Estereo, who released Ayo last summer, played European headline shows and festivals, and earned a Latin Grammy nomination for the music video to “Soy Yo.”

They also performed at the lavish Latin Grammy ceremony alongside Luis Fonsi, with Li singing a somewhat displaced verse of “Despacito.” Their performance was widely panned. “The Grammys was kind of strange,” Simon reflects. “We learned we don’t have to say yes to everything. But, it was kind of nice—we were invited to do that (by Fonsi), and it is cool that alternative music has a spot in the mainstream.”

Despite these relatively high-profile appearances, Simon still stresses the band operate more comfortably an alternative band. “We have done some big things, but we are obviously not ultrafamous or huge pop stars,” he says. “We like to do alternative concerts here in Colombia in small places and keep the alternative vibe because we come from that world, so that is a little more natural for us.”