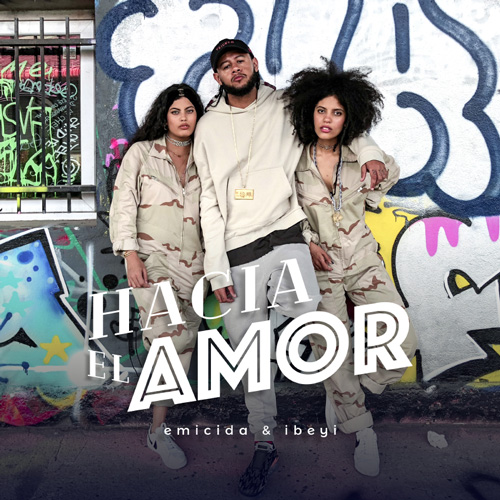 Brazilian rapper Emicida has joined forces with French duo Ibeyi for a new track that celebrates orixá deities such as Xango and Exú. Emicida is definitely no stranger to international collaborations having worked with the USA’s Miguel, the Tokyo Ska Paradise Orchestra, French singer Féfé and Ecuadorian Guanaco in the past. However, what is surprising is that here he raps in Spanish.

Ibeyi joined up with Emicida during the Brazil leg of their latest tour supporting second album Ash. The track was recorded at Lab Fantasma studios in São Paulo and was written by Emicida, Ibeyi, the producer Márcio Arantes and Ibeyi’s mother Maya Dagnino. With Ibeyi having Cuban roots the theme of the song makes a lot of sense, marking a shared ground between the Yoruba-derived gods who are present in both Afro-Brazilian and Afro-Cuban religions, while also using African drums as a meeting point too, as producer Arantes explains:

“I identified something in common between Ibeyi and Emicida, that became the backbone of the music. It was through black ancestry that this happened: we used a rhythmic pattern that exists in both the Brazilian candomblé and the Cuban santeria and it was this element that not only the whole arrangement was created but also what inspired the entire song, seeing the common thread between all of us.”

On the track, which features singing in both English and Portuguese, Emicida raps for the first time in Spanish: “Invisible​ a los problemas, mi poemas son el puente. Libre, cuerpo, mente”​ being just a snippet.

“Hacia El Amor” is available on digital platforms now, and will be available on vinyl via Sterns Music later in the year.

The video was filmed in Paris and directed by Christian Beuchet. Check it out below: