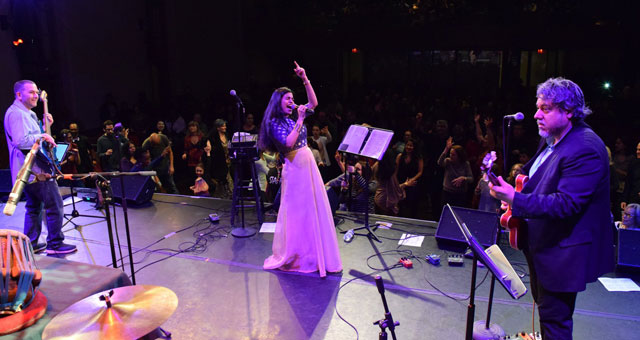 There’s a new kid in in the Big Apple, getting people up and dancing and shaking their booties to global music. But you won’t find it in Manhattan or Brooklyn. It’s in the borough with the most languages spoken in all of New York City, and the world: Queens! (It’s even been billed as one of the most diverse places in the world, for that matter.)

And it isn’t just one kind of global music at a time, either. That would be boring.

The series takes two bands with wildly different styles—like a Cuban band and a bluegrass band, have each play a set and then join forces on stage. But that’s not all, there are also dance lessons that go with both styles: picture salsa & square dancing. Bollywood dancing with swaying to roots blues.

You get the idea: Nonstop fun, and learning of styles of music and dance from different parts of the world.

The next two editions of Global Mashups have a Latin component.

On Saturday, the sixth of April, Latin Boogaloo, soul and R&B band Spanglish Fly gets mashed with ecstatic Eastern European Jewish melodies and rhythms by the Mini-Klezmer All-Stars, led by The Klezmatics’ Frank London.

And on the 20th of April, attendees can square dance with mandolin, bluegrass master Buddy Merriam & Back Roads, mashing up the night with the hip-swiveling, Afro-Cuban rhythms of Conjunto Guantánamo. On the fourth of May, Lemon Bucket Orkestra, Toronto’s multi-award winning, world-touring, groundbreaking guerrilla-folk party-punk Balkan-brass band, meets NYC’s Kakande, with lush vocals, sinewy koras, flutes, cellos and the balafon (xylophone) of a master griot from Guinea.