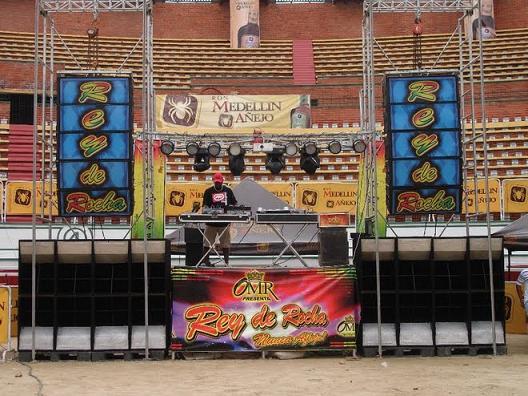 Rey de Rocha Mixtape – The Sound of the Picó’s

No one represents better the current sound of the Afro-descendent population of Colombia’s Caribbean coast than Rey de Rocha, a mammoth sound system (known as a picó in Colombia) that plays champeta at block parties in the big coastal cities of Cartagena and Barranquilla.

I once got the chance to check out Rey de Rocha myself, in a party in the Nueva Colombia neighbourhood of Barranquilla – where I had been kindly invited by Africolombia’s Fabian Altahona. A crude venue had been created down one street with rudimentary corrugated iron walls placed at each end (except for one gap that served as the entry point) and tables placed in front of the houses on each side, where crates of beer were being sold. Through massive speakers (see the image below and above) Rey de Rocha played the popular champeta hits – mostly lively electronic psuedo-R&B tracks with a mixture of African and Caribbean influences – with the accompaniment of live electronic drums and an occasional few words from the deejay. The noise was so blistering that trying to go to the portaloo near the speaker stack involved having your ear drums pummelled into obscurity. It would be days before my hearing returned to normal. 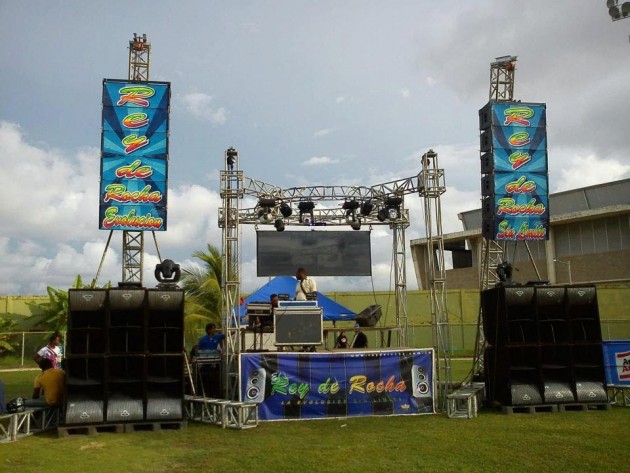 Champeta is going through many stages at the moment, being adapted by bands in Bogotá such as Tribu Baharu and La Makina del Karibe, both of which have taken the music in new directions, as well as having classic Afro-Colombian tracks reappraised on compilations like the excellent Palenque Palenque (on Soundway Records), but it’s here in the sounds of Rey de Rocha – and this mixtape which features their live set – that you can truly appreciate what it sounds like on a Saturday night on Colombia’s Caribbean coast.