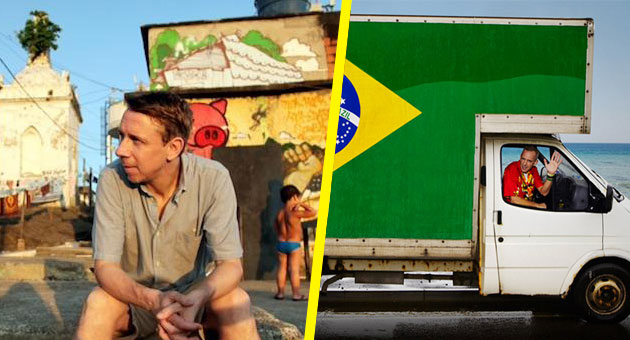 Two of Britain’s most prominent DJs/producers have Brazil-themed compilations lined up for this summer, with release dates scheduled to tie in with a big football tournament that is apparently happening in Brazil. This week, a trailer was launched for Gilles Peterson’s project. In a similar vein to his Havana Cultura albums, which looked to fuse traditional rhythms with modern production, Peterson put together a collective of musicians which he has christened Sonzeira. Their first release will be Brasil Bam Bam Bam and features some true Brazilian musical legends (Elza Soares, Marcos Valle, Naná Vasconcelos) alongside some of the country’s newer names (Kassin, Lucas Santtana, Seu Jorge). The album looks set to tap into the “Rio groove” with a large focus on samba and it’s derivatives (samba-funk, samba-reggae, etc.) but, as with all Gilles Peterson projects, also a look at how jazz and modern electronic beats can fuse with that.

There is now a website dedicated to this project, so check out brasilbambambam.com or the trailer below to find out more about Sonzeira’s Brasil Bam Bam Bam. The album will be released on May 19th and can be pre-ordered through Amazon. We know less about the Fatboy Slim project as of yet, apart from the fact that it’s being marketed as the “unofficial soundtrack” to the World Cup. In many ways it is no surprise that Fatboy Slim is releasing a “Brazil” album. He has toured the country many times to sold-out audiences, even playing Salvador carnival in 2013, and has a big following in the country. This is evident if you’ve seen his Incredible Adventures in Brazil DVD, which shows one of his tours around the country.

Fatboy Slim Presents Bem Brasil will be released on June 3rd and will focus on electronic music inspired by Brazil or featuring samples of Brazilian music. The compilation features a more international set of guests than Brasil Bam Bam Bam with DJs/producers such as DJ Fresh, Gregor Salto, Psychemagik, Eats Everything, Dimitri Vegas & Like Mike, Claude Von Stroke, Joey Negro, Felguk and Carl Cox all contributing to the album.

Fatboy Slim Presents Bem Brasil is available for pre-order from Amazon. As a taster for Bem Brasil you can listen to Gregor Salto’s “Samba Do Mundo” below: